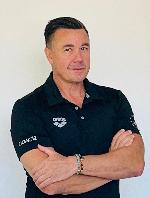 Tom Thorum accepted the head swimming coach position with Olympus High school in 2013 and has been the head coach of the Olympus Aquatics (OA) club swim team since its inception that same year. In his first season at the helm, Tom led OA to a top 10 finish in the 2014 Utah Long Course State Championships. In 2018 and 2019, OA finished 1st at the Utah Short Course Age Group State Championships. In 2021, OA finished 1st for Seniors at the Utah Long Course State Championships and in 2022 OA finished 1st at the Senior State Short Course Championships. Tom successfully grew the team from just a few swimmers in August 2013 to more than 180 today. Tom brings over 40 years of competitive swimming experience from multiple levels to OA. He began swimming competitively at age 5 in Salt Lake City at the Fort Douglas Country Club under his father Thomas Thorum, Sr. Tom swam for the Salt Lake Tsunami Swim Team from 1982-1988, for East High School from 1986-1990, and for the University of Utah from 1990-1994. Tom was Team Captain at East High in 1990, where he received the Eric Hoff award, and Team Captain at the University of Utah in 1994. From 1989-1997, he was also an Assistant Coach for the Fort Douglas Summer League team. During this time, the Fort's swim team went undefeated and produced several collegiate swimmers including two Olympic Trial qualifiers and one World Championship qualifier. In 1995, he was an Assistant Coach at the University of Utah and in 1998 he coached at the Salt Lake Tennis Club. This was the first season in over 16 years that the Club’s swim team went undefeated and won the Conference Championship. Tom continued swimming competitively at the Masters level and attended multiple Masters National Championship meets including the US Masters Swimming Championships in Indianapolis, Indiana in 2000, where he set the Utah State Masters record in the 100-yard backstroke, Santa Clara, California in 2001, and Honolulu, Hawaii in 2002. As a triathlete, Tom completed five Ironman events in New Zealand, Canada, Hawaii, Brazil, and qualified for the Ironman World Championships in 2004 and 2006. In 2006, he recorded the third fastest Ironman swim in history. In 2009, he was recruited back to the Salt Lake Tennis Club as Director of Aquatics and led the swim team to Conference Championships in 2009 and 2011. Tom is currently an ASCA Level 2 coach responsible for the OA 13-14 alpha Team and Senior Teams. In 2015, he was selected as the Utah Age Group Zone Team head coach, which competed in Hawaii at the Western Zone Age Group Championships in August. In 2017, Tom was awarded Utah Swimming Age Group Coach of the year and in 2021 he  was awarded Utah Swimming Senior Coach of the year. Tom is a 1995 graduate of the University of Utah, where he earned his Bachelor of Science degree and a 1998 graduate of the University of Utah Graduate School of Architecture, where he earned his Master of Architecture degree.

Born and raised in Albuquerque, New Mexico Zofi swam her first two years in college at the University of California, Fresno and broke seven of the school records and won the 200fly at the mountain west conference championship. She went on to swim in Poland for their National team for a year before transferring to the University of Utah to finish her swimming career and get a degree in kinesiology and nutrition. Zofi has always had a passion for swimming and seeing kids find their passion for swimming is what she strives to do.

Mark is a USA Swimming Level 2 coach, with 15 years’ experience as a Utah swimming coach working with children, teens, and adults. Swimmers and Triathletes seek him out to improve and refine their techniques to become faster, and more efficient for their future success. He has successfully coached kids from introduction to swimming, to State Champions and Regional Qualifiers to the Western Zone Meet. Mark competed as a member of the AAU Swim Team, “Phillips 66” and they were 2 time National Champions. He set 3 National Junior Olympic records. In High School, his Medley Relay Team finished first and set the California State record. At the Utah Masters State Championships he finished first in his division, 2nd overall in the 100 yard IM, and first in his division, and 3rd overall in the 50 Free. As an open water swimmer, he has twice "ESCAPED ALCATREZ", and swam to the mainland in 27 minutes. He had the honor of being coached by Flip Darr (USA Olympic team Coach), Don Gambril (USA Olympic Team Coach), Dr. Richard Jochums (USA Olympic Team Coach), Peter Daland (USC Coach - 4 NCAA Championships), and Skip Kenney (Stanford Swim Coach - 7 NCAA Championships).  Mark applies all the techniques he has learned over the years from these world class coaches, to refine his swimmers techniques so they are faster in the water. Mark provides more than just coaching to his team, he shares with them goal setting skills so they achieve success outside the pool and in their personal lives. Mark earned a Bachelor’s degree from USC in Business Communications in 1981, and his Master’s degree in Business Marketing in 1992.