Gary has twenty years of coaching experience at both the club and collegiate levels.  He swam at the University of Minnesota.  Following his graduation from the University of Minnesota, he served as the lead site coach for the Twin Cities Swim Team in Minnetonka, Minnesota from 2001-2005.  He was then the head age group coach for the Dynamo Swim Club in Atlanta, Georgia from 2005-2008 where he was named as the 2007 Georgia Age Group “Coach of the Year.”

He has achieved a Level 4 ASCA (American Swim Coaches Association) certification.  With his experience at several of the leading club and college teams in the country, we could not be happier to have Gary come to Cavalier Aquatics to lead us on the next stage of growth for the program.

Todd DeSorbo was hired as the head men’s and women’s swimming and diving coach in August 2017. Since taking over, the women have won two ACC titles, and were seeded to become national champions before the COVID crisis caused the meet to be cancelled. In 2020, the women scored the most points in a single ACC championship, ever. The men have rocketed from the bottom of the NCAA to a top 10 finish in 2019, and to a second place ACC finish behind a fiercely competitive NC State squad in 2020.

Prior to coming to Virginia, Desorbo spent six years at NC State as an associate head coach, bringing the program to the national and international stage. There, DeSorbo worked primarily with the Wolfpack sprinters and was a developmental specialist. He oversaw the programs’ recruiting, training and day-to-day operations. Additionally, Todd coached Ryan Held to the 2016 Olympic team, where he helped the USA win gold in the 4x100m Freestyle Relay.

Todd joins CAV-Y as Director of High Performance, and adds a wealth of knowledge and experience to the coaching staff.

DeSorbo holds two accounting degrees from UNCW, earning a bachelor’s degree in 1999 and a master’s degree in 2000. A native of Salisbury, N.C., DeSorbo is married to Lauren Suggs. They have one son, Jack, and one daughter, Cate who are both on the team. 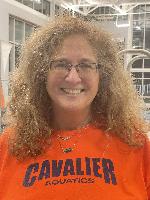 Bridget is currently the Head Age Group Coach and coaches the Platinum and Silver groups. She is a University of Virginia graduate with a BA in Psychology.  She completed her Master's courses in the Curry School of Education in Sport Psychology, with world renouned Bob Rotella as her mentor and director. Bridget has a strong backround both as a swimmer and a coach.  She has been coaching for almost 40 years.  Her strength lies in her knowledge of stroke technique and training philosophy.  She has an incredible passion for working with all levels of swimmers in helping them to realize their potential.

Her accomplishments include:  being selected and participating as the Head Zone Coach in Virginia Swimming for the last 5 years as well as coaching at many zone meets for Virginia, Maine, and New England swimming as an assistant; Level 4 ASCA Coach, former member of VSI Board of Directors in Club Development; Virginia Age Group Coach of the Year (2000); UVA scholarship swimmer; Age Group Coach of Olympian Ian Crocker while in Portland (Maine); and participating as a Senior National and NCAA  level swimmer. In addition, Bridget has developed and coached state and zone champions, state record holders, nationally ranked swimmers, and national qualifiers.  Many of her swimmers have continued  to compete at the collegiate level and have earned scholarships to swim in college.

Her roots run deep in Charlottesville.  She has coached summer league teams for the city of Charlottesville (in fact started the team at Washington Park), at the Key West Club, the Elks Lodge and in her home town or Reading, Pennsylvania.  She began her year-round swimming career at the Reading YMCA, has attended Y Nationals as a swimmer and coach, swam for her High School team (Wilson High School), and swam for both Lancaster Aquatic Club and Foxcatcher (under the tutelage of Olympic Coach George Haines). She has worked with Olympic Coach Joe Bernal at the Bernal's Gators, has attended Junior Nationals as a coach on many occasions, and Senior Nationals as a swimmer.  Her background in the sport of swimming is extensive.  From a coaching standpoint, she believes the whole is stronger than the parts and working together as a team is the foundaton for success.

Bridget has two children, Jeremy Edwards (24) and Quinn Edwards (21) and was married to and coached with British Olympian Martin Edwards (Munich, 1972), who is currently coaching in England.  Jeremy, also a coach, is the manager of the ODU swimming team, and will be graduating this year with an IT business degree. 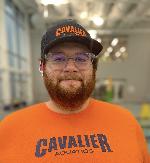 Jeremy grew up in a swimming family as his mother is coach Bridget and his father was a British Olympic Swimmer. He has been swimming since age 5 and swam a majority of his childhood with Burkwood Aquatic Club. He recently graduated from Old Dominion University in 2020 where he swam for 1 year before deciding to end his swimming career due to injury. He was then the ODU team manager for 3 years.

Jeremy has coached at many different levels and abilities in his coaching career. He prides his athletes on swimming with great technique and learning how to swim efficiently. He has coached summer league teams in Mechanicsville, VA. Along with coaching for Tidewater Aquatic Club in Norfolk, VA, and helped the ODU team with technique work and pacing. He also coached the ODU club team and was preparing 15 athletes for College Club Nationals before the Covid-19 Pandemic. He was also selected as a Virginia Swimming Eastern Zone coach in the summer of 2019.

Jeremy was an experienced distance swimmer in his swimming career being an eastern zone championship finalist in multiple distance events as well as placing 7th and 4th in the VHSL 5A state championships in the 200 & 500 freestyle.

Coach Hunter grew up in the Charlottesville/Crozet area swimming for the Crozet Gators for 13 years and Western Albemarle High School for 4 years. This is Hunter's 4 th season with CYAC. He was lead Bronze Coach during the 2017-2018 season and has served as an Assistant Coach for the program since 2015.  This past summer he served as Head Coach of the Crozet Gators Swim Team, and an assistant coach with the team two summers prior to being the Head Coach. This past season he led the Gators to an undefeated regular season, Sportsmanship Award winners for Division I and a second place finish at JSL Champs.