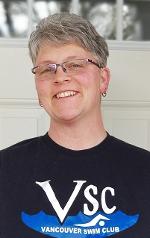 Lisel Johnson began her swimming career in 1979 at age five with the Canby Gators.  She swam with the Gators until her high school graduation.  She then went on to swim with the University of Nevada, Reno, an NCAA Division I school. In 1996, Lisel helped her team capture the Big West Conference Championship title her Senior year. During her time in Reno, Nevada, she began her coaching career with a small USA club team, Sparks Piranhas. After being an assistant coach for a little over a year, she was named head coach. In 1996, Lisel accepted an assistant coaching position with a larger, more established team, Lakeridge Swim Team, also in Reno, Nevada. During her time with Lakeridge, Lisel coached a very young swimmer, Michael Weiss, who went on to compete at The Olympic Trials in 2012 and 2016. In 1997, Lisel graduated with her bachelors degree in Elementary and Special Education. After moving back to the Pacific Northwest, Lisel took an assistant coaching position with Oregon City Swim Team until she decided to take time off to raise her two young boys. After earning her Masters Degree in Children's Literacy she began to miss the pool. In 2014, Coach Lisel decided to get back onto the pool deck as an assistant coach with VSC.  In 2018, Lisel was named Head Coach.

Bryan Butcher has been coaching swimming for over 26 years. Coach Bryan has a Bachelor of Science degree in Biochemistry from Cal Poly, and a Master in Teaching from Lewis and Clark.   Bryan is a chemistry teacher at Jesuit High school in Portland Oregon.  His love for teaching and learning has always extended beyond the classroom and into the pool.  In 1993 Bryan founded and coached the Columbia-Willamette YMCA Swim Team in Portland, OR.  In 2007 Bryan moved to Vancouver WA and begin coaching for the Vancouver Swim Club in 2011. Bryan enjoys coaching swimming at the high school level.  He coached at Valley Catholic from 1996-1999 and has been coaching Jesuit High School since 2002.   Bryan has led Jesuit High School women’s swimming to 7 State titles. He has led Jesuit boys to a top three state finish for three consecutive years and 5 state title. He was awarded the Oregon Athletic Association Coach Of The Year in 2010 ,2011,2013,2015,2016 and 2017. Bryan is an ASCA level 3 age group coach as well as ASCA level 4 for Adaptive Swimming.  He and his wife Jennifer (a 2 x Paralympic swimmer) have already introduced competitive swimming to their sons.  Bryan has coached numerous Top 5, NAG 16, YMCA National, and 3 Paralympic swimmers.   In 2002 Assistant Coach for the USA National Disability Swim Team for the IPC (International Paralympic Committee) World Championships Mar Del Plata, Argentina and  Head Women’s Coach for the USA National Disability Swim Team for the USABA (United States Association of Blind Athletes) World Championship  in 2003.  and received the John Arlin Adaptive Swimming Award in 2003.

Kyle started swimming for VSC just after the 2000 summer Olympics, inspired by then world record holder, Lenny Krayzelburg. He continued competitive swimming through adulthood, competing in the 2014 Gay Games in Cleveland, OH. Now he swims for fitness and fun with the hope of competing again at the 2022 Gay Games in Hong Kong. He began his coaching career in 2017 shortly after becoming an elementary school teacher, assistant coaching for Skyview High School's girls and boys teams.