Coach Dave has been Ashwaubenon Swim Club's head coach since 2015.  After swimming competitively at Rhinelander High School and UW-Lacrosse, Dave has since had a more than 30 year career as a competitive swim coach, aquatic director, and Red Cross trainer. As a USAS, ASCA, YMCA, and AAU certified coach he has coached swimming all over the country and is blessed to have worked with every level of swimmer, from first time bubble blowers to future Olympic medalists and world record holders. Coach Dave’s team model provides swimmers with the opportunity to become high achieving athletes through character driven dedication to the sport. He was a 2019 Finalist for WI Age Group Coach of The Year and currently serves on the Wisconsin Swimming LSC Board of Directors as the Senior Coaches Representative. Dave has a Master’s Degree in education and has been a math and science teacher at the middle and high school levels, and currently teaches health and PE in the Grace Schools system. He also served honorably as a Sergeant in the army, including tours in Iraq and Indonesia. In his spare time he loves fishing, reading, math, spoiling his pets, and following the Packers.

Coach Katie is ASC's head age group coach. Katie moved to Wisconsin from Alaska, where she was the head coach and program director for the Anchorage YMCA Swim Team.  Katie has coached all levels of swimming from pre-team through senior level, designed and managed learn to swim programs, coached both boys and girls high school as well as masters swim teams, and has served on the staff of various all-star Zone Teams, including coaching for Team Wisconsin at the 2019 Zone Championships. Katie is USAS, YMCA, AAU, ASCA, and NFHS certified and has a Master's Degree in education, and she is ASC's voting delegate to Wisconsin Swimming. She has worked directly with children in sports, research, and educational environments for almost 30 years and loves working toward the moments when athletes achieve something they didn’t know they could do. When she's not at the pool Katie loves playing with her pets, knitting, fishing, puttering in the garden, and traveling to new places. 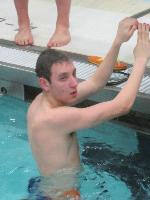 Andrew is another Alaska transplant who has come to Green Bay to attend school. He was a competitive swimmer for over 10 years at the club and high school level, achieving state finals several times during his swimming career. During that time he also earned team athlete of the year honors, served as a high school team captain, and was selected as the High School Heisman Award state finalist for the state of Alaska his senior year. Andrew was a club swim coach for 4 years with the Anchorage YMCA Swim Team, and he has taught hundreds of children to swim as a swim instructor in club, YMCA and municipal lesson program settings. He has also certified many lifeguards as a lifeguard instructor. Andrew is an avid chess fan and a hobby student of archaeology who brings a high level of energy and enthusiasm for swimming fundamentals to the pool deck for the benefit of our ASC swimmers. 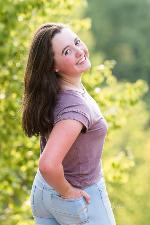 Claudia has been an ASC Swimmer and AHS Swimmer for all of her swimming career.. She is a college freshman in the art education program at St. Norbert's College. She stays in the water regularly with the Ashwaubenon Masters group and loves math and science.