Jay enjoyed his own collegiate athletic career while attending Willamette University in Oregon, where he graduated in 1991 with a degree in English. He competed in both track and cross country and also participated in many triathlon events around the country.

Jay began coaching at the Oshkosh YMCA in 2000.  He was instrumental in building the YMCA swimming program, increasing its size from 70 to over 150 kids.  Under his guidance, the team, which previously had a thirty-year drought of not scoring at national meets, went back to nationals and began to score points on a regular basis.

From 2011-2013, Jay was a site coach for the Sarasota YMCA in Florida.  He later returned to resume the Head Coach position of the OSHY Swim Team in August 2013.

Jay’s primary benefit of coaching is seeing his athletes take pride in themselves and their accomplishments, whether they win or lose. His desire is that athletes get something more from swimming than just getting up and down the pool with fast times. “You can learn from every experience, whether it’s success or failure. The value of each experience is determined by your reaction to it.” 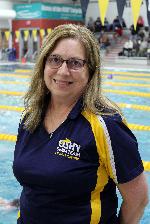 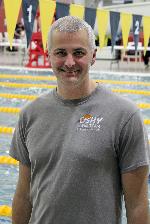 Coach Eric was a swimmer at the La Crosse YMCA and at UW-Green Bay where he graduated with 4 team records, 2 individual conference titles and 1 team conference title. After college he coached the Sturgeon Bay High School Boys Swim Team (3 state titles), was the head coach of the Door County YMCA Swim Team and then the Head Coach of the Fox Cities YMCA Swim.

Eric, his wife Kristen and two kids have recently begun the process of moving back from Florida after living there for 8 years. Eric has a daughter, Addyson, that will be joining OSHY and a son, Tommy, that you'll see getting into trouble.

Coach Sam started swimming for OSHY when she was about 10 years old. She grew up in Oshkosh and swam for the OSHY team until she graduated from Oshkosh North High School in 2010.

Following high school, Sam attended the University of Evansville located in Evansville, IN and graduated in 2014 with a Bachelor’s degree in Elementary Education. Sam swam for 1 year for the Purple Aces. Her favorite events are the 500 free, 1000 free, and 1650 free. She also loved doing the 50 fly.

Sam moved back to Oshkosh after graduation college and currently teaches middle school in the Fond du Lac School District. She lives in Oshkosh with her husband, Justin and their two dogs.

Sam began coaching with OSHY in April of 2016.

Mitchell started swimming when he was about 5 years old and began swimming competitively at the age of 12. He grew up in Perry, Ohio and graduated from Perry High School in 2012.

Following high school, Mitchell attended Ohio Northern University located in Ada, Ohio and graduated in 2016 with a Bachelor’s degree in Mechanical Engineering.  Mitchell was a swimmer all four years of college; his main events being the 50 Freestyle, 100 Freestyle, and 100 Butterfly.  He competed all 4 years at the Ohio Athletic Conference Championship Meet, and during his senior year he finished 2nd in the 50 Free, 2nd in the 100 Fly, and 3rd in the 100 Free.  He was also part of the 400 Medley Relay, 200 Freestyle Relay, 200 Medley Relay, and 400 Freestyle Relay, all of which finished in 1st place. Mitchell ended his collegiate swimming career by helping bring home a 12th straight OAC Championship title.

Stephen Russell started swimming at the age of four in his hometown of Houston, Texas. After graduating from Klein High School in 2004, he attended Clemson University>

As a coach, Stephen hopes to instill into his athletes the many things he learned during his own swimming career. He is committed to teaching his swimmers that lessons learned in the pool can be applied to their lives outside of it. Aside from coaching for OSHY, Stephen is a captain in the United States Marine Corps and an Afghanistan veteran. He strongly believes that hard work and a positive attitude are essential to an athlete’s success.