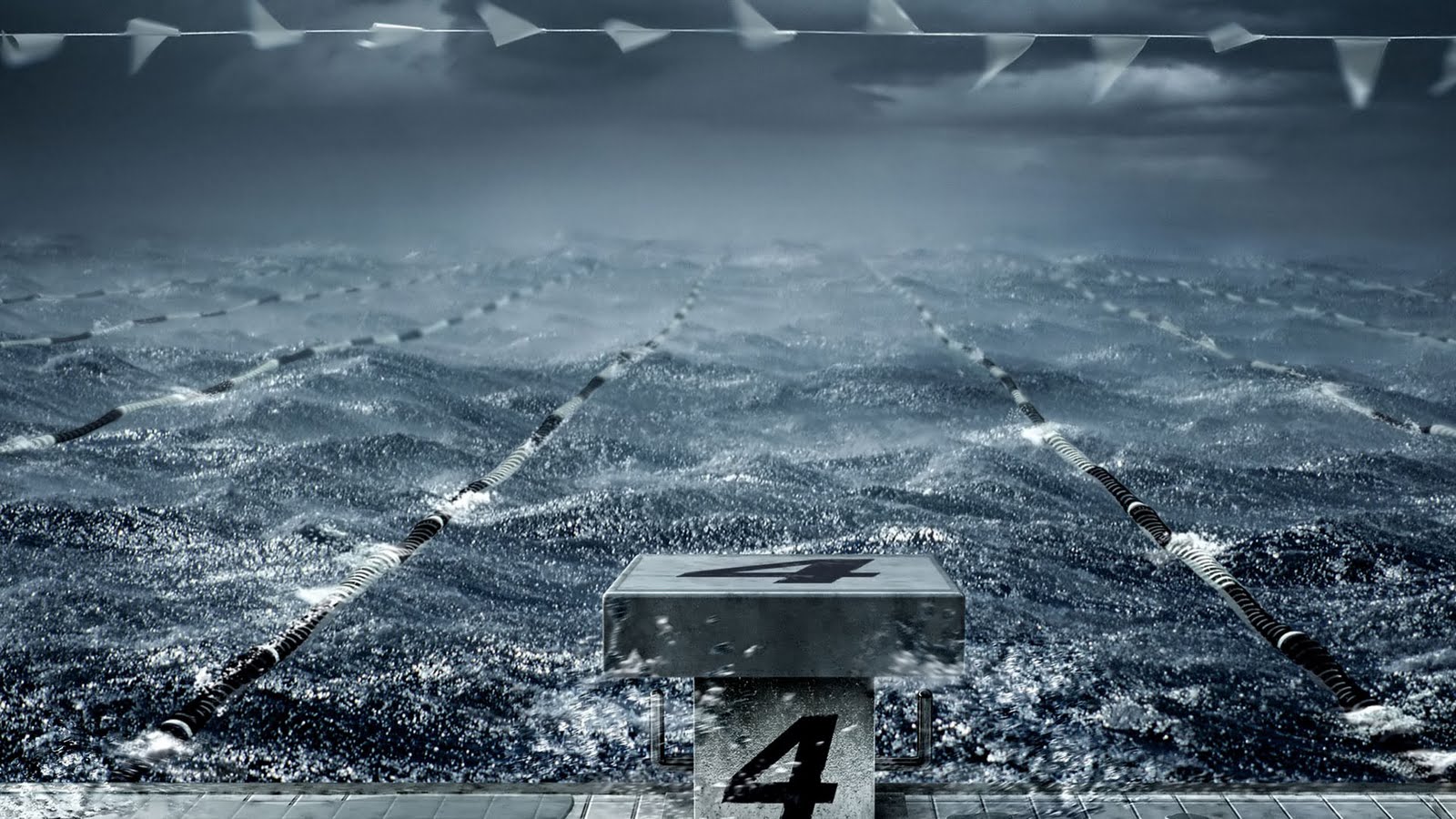 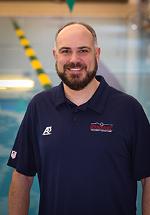 Coach Rob has been at SWAT since March of 2015. As our Head Age Group Coach and Competitive Program Director starting February 2016. Rob has over 20 years of coaching experience and has covered just about every level of the sport. He has worked with learn to swim, country club, age group, senior, high school, college and masters. He currently finds himself coaching his favorite age and skill level of swimmers in the 9-12 year old swimmers. It is with age group swimmers he excels watching them reach goals, find success and become better people.

As a club coach he as coached several NAG Top 10 athletes, national, junior national and Olympic Trial swimmers as well as numerous state qualifiers, champions and record holders. Rob has been a Wisconsin Zones coach nine times and served as the Head Coach three times.

Coach McCabe has been involved with governance of Wisconsin Swimming and the WIAA. Rob has been the Wisconsin Swimming Age Group Chair, Coaches Representative and on the WIAA Coaches Advisory Board. He has administrative experience as clubs Business Manager and Chairperson.

Coach Rob is originally from Fort Atkinson and currently resides with his wife Jess in Glendale and their children Patrick and Maura. As a youngster he started swimming at age eight with FAST. Later in high school he swam with J-HK. As a club swimmer he was a state qualifier and team record holder. When in high school he represented his school at the state meet as an individual and relay contributor. He earned awards such as, 4x letter winner, MVP and Team Captain. From there he went on swim collegiately at UW-Whitewater. There he was a multiple conference finalist and runner-
up. With the Warhawks Rob was Team Captain, MVP, 4x letterman and Conference Swimmer of the Week. Throughout most of his competitive swimming career he excelled at distance freestyle and sometimes IM and backstroke.

If you catch him away from the pool deck he may be outdoors hiking, bicycling or up north somewhere. He enjoys reading John Grisham, trivia, listening to classic rock and jam base music. He is on the path to see his current favorite band Phish 100 times and has seen many rock legends
live in concert. 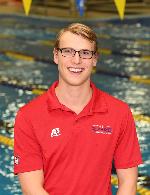 Coach Mike has been involved with SWAT since Age 6. Progressing from Swim America into the age group training levels. Coach Mike swam for Greendale High School: while doing so was a state qualifier all four years and a finalist sophomore to senior year. Coach Mike went on to swim at Indian River State College in Ft. Pierce Florida before transferring home to compete at the D1 level for the University of Wisconsin Milwaukee.He graduated UWM with a Bachelor’s degree in Psychology with an emphasis on Physiology. Whilst swimming for UWM and SWAT, Coach Mike was a US National qualifier in the 50 Freestyle and 100 Butterfly as well as a Horizon league runner up in the 100 fly. After graduating Coach Mike he began an internship in the UWM Strength and Conditioning department for a year,  and also returned to SWAT as a 13 & Over coach.   Progressing into his coaching career with SWAT,  Mike jumped at the opportunity to coach at the college level for Carroll University.  After a two year stint at Carroll he was excited to pursue a head coaching position with SWAT.

“I love the sport of swimming just as much now as I did the day I began. Transitioning from the role of athlete to coach has been a fun and challenging experience with each passing season. I have come to appreciate the countless amount of opportunities that swimming has presented to me both in and out of the pool! Swimming was an outlet to not only challenge myself mentally and physically but it also created opportunities to explore, build friendships and relationships that I know will last a lifetime. As a coach I work to help young athletes find their passion for this sport. I coach to  teach kids to use hard work, dedication, positive outlooks and tons of fun to achieve their goals. I want them to also see what countless friendships and opportunities will come their way with the true dedication they give to this sport.” 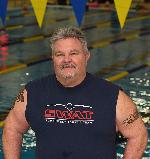 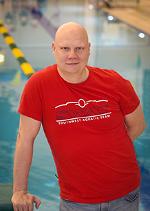 Coach George is a charter swimmer of SWAT on its inception in 1985. Starting his coaching career in 1991 as Head Coach he has coached novice to national level swimmers of all ages. George works to bring the joy that a swimmer’s experience finding their competitive drive, making the first legal swim or advancing their careers to the collegiate level. Swimming is an enduring sport that builds character, creates lifelong relationships and fosters the will to succeed.

As a High School coach, he has coached numerous school record holders, state champions and has taken Whitnall High School every year to the state meet since taking over as Head Coach. In club he builds the framework for swimmers to reach their full potential and advance to higher levels in the program. Many first-time state cuts have come from Coach George.

Coach George was born and raised in Milwaukee and currently lives in Muskego with his wife Rebecca and their four children. George started his swim career with the Greenfield Otters and then was an original member of SWAT when Greenfield and Whitnall merged. In High School he was a 4x letter winner, 4x MVP and Team Captain and held the 200 IM School record. Coach George did not swim in college but started his coaching career in Michigan. Taking the reigns of a small team in 1991 he grew and developed the UPY Barracudas from 18 swimmers to 42 and had many qualifiers at the State level. After Graduation he headed back to Wisconsin and Coaches the team that fostered the love of the sport in him. 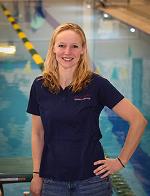 Coach Kaitlin is in her eighth year with SWAT and is proud to be part of this team. She started competitive swimming at the age of seven and it has been a part of her life ever since, including a successful high school and college career in Minnesota. She enjoys helping young swimmers learn and grow in their abilities and love of this sport, so they too can make swimming a sport they can enjoy for life. Besides coaching, Coach Kaitlin enjoys staying home with her four boys and spending time with her husband, Micah. She likes to stay active swimming with SWAT masters, running, biking and gardening. 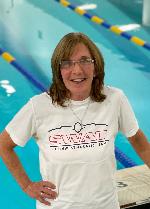 Coach Cheryl has been with SWAT since 1996. Cheryl has over 30 years of coaching experience and has covered just about every level of the sport. She has worked with swim lesson programs and competitive age group, senior, high school, and master swimmers. She has always preferred the youngest and finds it most gratifying coaching the 8&amp;under swimmers. She takes them under her wing and lovingly encourages and inspires each
young athlete she comes across.

As a club coach she has coached decades of swimmers and with great joy watched them grow and succeed in the sport earning countless college scholarships. As a competitive swimmer herself starting at the age of five Cheryl started her coaching career with the West Allis and New Berlin swim
clubs finally finding herself at SWAT where she found the unbeatable family oriented program she had been looking for for her own swimming children and the rest is history. Her children participated in competitive swimming and excelled throughout the years taking them to experience zone level
competition across the region.

Coach Cheryl is originally from West Allis and currently resides with her husband of 40yrs, Dennis in Waukesha. Their 3 grown boys have now brought them 4 grandchildren who are currently on course in continuing the tradition of participating in the great sport of swimming like her boys did and to
grandma’s great pleasure.

When coach Cheryl is away from the pool you can find her enjoying the great outdoors with family and working in her yard and garden. She is active in her church and loves to attend Christian rock concerts. You can also find her working teaching water aerobics and/or swimming a few laps in the
mornings at the Westwood Fitness center to keep in shape. 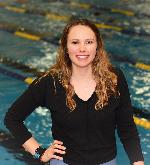 Hello everyone! My name is Kaitlin Squier and I have been coaching with SWAT since March of 2018.   I am from Appleton, WI but attended Carroll University as a student in the Physical Therapy Program at Carroll. I completed my undergraduate program this past spring in Exercise Science with a minor in Sports Nutrition and will start graduate school this fall. I have been swimming since I was 8 years old with Fox Cities YMCA Swim Team (FCYST) and swam with Carroll University’s swim team focusing on breaststroke and IM. I have also been a lifeguard for the past 6 years and taught swim lessons to beginners as well.  As as an avid runner since I was younger,  I was also a part of the Track and Field team at Carroll University.  Along with swimming and running, a few summers ago I began competing in triathlons. I am excited to be take my competitive energy into coaching  with SWAT! 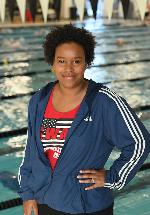 Hello SWAT team! My name is Alexandria Frasier, I am 25 years old and was a competitive swimmer for 20 years. I am originally from New Bedford, Massachusetts. While in high school, I have qualified for Jr. Nationals & Nationals multiple times with my club team, Bluefish Swim Club. In 2013, I was a panel speaker for USA Swimming Diversity Camp in the East Coast. In college, I was recruited for the 100 free, 200 free, and 800 free relay. I swam for the University of Tennessee-Knoxville for my freshman and sophomore year, qualifying for SEC's and NCAA'S. Then I transferred to UW-Madison and swam for the Badgers my junior year. I graduated from UW-Madison in 2015 with a degree in Sociology. I'm looking forward to meeting all of you. 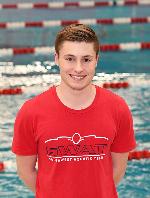 Coach Michael has been involved with SWAT for over 10 years. Beginning in the Swim America program at the age of 4 and then joining SWAT competitively at 7. He earned his first state cut at the age of 10 and since then has swam at the state level throughout his swimming career. Michael graduated from Whitnall High School where he swam for all four years and earned MVP for both his junior and senior years. Michael is currently attending school at Carroll University where he is studying Athletic Training and he is also apart of the University’s swim team. Michael also works at Swim America as an instructor teaching swim lessons.

Coach Stephanie began assistant coaching the  Gold and Silver 8’s in June 2014.  She has been involved with competitive swimming since she was 8 years old swimming on the Kenosha Barracuda, Green Bay YMCA, SWAT and Greenfield High School swim teams.  Coach Stephanie taught swim lessons through Swim America for three summers while attending UW-Eau Claire. She was also an assistant coach for the Tosa West High School Girls swim team.  Coach Stephanie lives at home with her husband Tristan, two dogs Lexi and Maddie and daughter Kennedy.  She is looking forward to having another awesome season! Go SWAT!

My name is Jackson Zgola and I am currently a senior at Greendale High School. I have been involved in swim for the past 10 years starting off in Swim America. I joined SWAT and progressed up to the senior platinum group. I have qualified for state on both the club level and the high school level. I swam for Dale Schrank on the PG2 co-op team on varsity. After high school I plan on pursuing a career as a firefighter.

Jennifer Peters will be assisting our 8 & Under team.