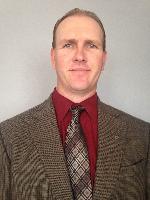 Casey was born and raised in Utah.  Attended Utah State University where he
received a degree in mechanical engineering.  Casey got involved with
swimming when his two daughters started swimming.  He started to support his
girls by volunteering as an official and later progressed to a referee.  He
currently serves on the Wyoming Swimming Officials Committee.  He started
coaching in 2012 and had the opportunity to work with and learn from Rob and
Susan Anderson and then spent many years learning from Coach Randy Walker.
While his girls have moved on he continues to coach.  He enjoys the
opportunity to work with hard working kids and loves to see them improve and
achieve their goals through dedication and commitment.  "It's extremely
gratifying to see a kid set a tough goal and then dedicate themselves to
achieving it.  It's a lot of fun to be part of that process."