Allan McCallum spent the past 3 years building the Women's Swimming & Diving team at the University of Mary in North Dakota. Starting the program from scratch, the team improved each year under his guidance. In his last year at UMary, he helped five swimmers achieve NCAA B cuts, two swimmers qualified for the national championships and he coached the conference freshman swimmer of the year.

McCallum joined the Marauders from the Central Iowa Aquatics club program in Des Moines, Iowa, where he was the head coach the past year after serving as the associate head coach for two and a half years. In his time at CIA, the program won five state championships, had a women’s sectional team title and was twice recognized by USA Swimming as a Bronze Medal Club (2013, 2014). McCallum worked with seven Junior National Qualifiers and one Olympic Trial qualifier.

Before joining the Central Iowa program, McCallum was the head coach of the Rapid City (S.D.) Racers Swim Club from 2010-12. In two and a half years, four swimmers qualified for Jr. Nationals, three for Sr. Nationals and was recognized as a bronze medal club by USA Swimming.

McCallum spent two seasons as a graduate assistant coach at Northern State in 2008-10. While there the Wolves broke 56 school records and produced two NCAA Division II provisional qualifying times. Additionally the team posted a team grade point average over 3.50 each semester. While at NSU, McCallum also worked with the Aberdeen (S.D.) Swim Club as an assistant coach.

A native of Bozeman, MT., McCallum was a high school honorable mention All-American in 2001 and 2002. He swam collegiately at Texas Christian from 2002-2006. While swimming for the Horned Frogs, Allan was a team captain senior year, a first-team All-Conference USA performer in 2003, 2004 and 2005 and helped TCU win league championships each of those same seasons. The TCU Freshman Swimmer of the Year in 2003, he also earned team awards for most determined (2004), most dedicated (2005) and most valuable team contributor (2006).

He began his coaching career after completing his collegiate eligibility, serving as a TCU student assistant in 2006-07. He returned home as an assistant boys coach at Bozeman High School for the 2007-08 season and helped the boys team place second and the girls team fourth at the Montana state meet.

McCallum earned a bachelor’s degree in marketing with a minor in communication from Texas Christian University in 2007 and graduated from Northern State University with a master’s degree in physical education and coaching in 2010. He is married to Maryann.

Coach Bob has been with the YMCA of Greater Des Moines since late 2014 and is the Head Coach for the Ankeny practice site. Prior to coaching the Aquahawks, Bob was a graduate assistant coach with Iowa State University. Bob received his BA in Journalism/Mass Communication and Education Certification from ISU. Bob has a strong personal background with swimming. He was a four-year letter winner as a member of the Iowa State Men’s Swimming and Diving Team and a member of the 1995 Big 8 Championship Team. Back in high school, Coach Bob was received All-American Honorable Mention in the 50 Free (which he considered his best event, yet the 100 breast was his favorite!).

Coach Bob believes that coaching has the ability to affect the lives of children in a positive manner. Sport teaches lessons in teamwork, integrity, dedication, sacrifice and humility and I believe that delivering those lessons is tantamount to helping our swimmers achieve athletic success. My goal is to develop young people who enjoy swimming and are healthy in mind, spirit and body.

He enjoys spending time with his family; wife Susin and children: Joe, Jaycin (JJ), Sydney, Chloe, Maia, Alanna and his pets; Tigre (cat), Chaos and Havok (Siberian Huskies). In his spare time, you can find Coach Bob enjoying one of his favorite hobbies; reading, basketball and video games. 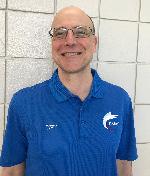 After 15 years in corporate America in various finance roles, my passion brought me back to the pool with the opportunity to coach masters.  I relish coaching masters to help each athlete achieve the goals they have set for themselves.  Masters is a gratifying blend of teaching and coaching.

Along with Mike McWilliams, I owe a huge debt of gratitude to Bill Saxton and Rod Kubat. I also met my wife, Rachel Stauffer, through the sport of swimming.  Many thanks to the countless others who have helped me along the way.

The DSMY Aqua Stars welcome Jennifer Ledbury as the head coach of the newly formed YMCA Synchronized Swimming Team beginning in the fall of 2019.

Jennifer grew up around music and children playing three instruments throughout school and dancing competitively. Her dance teaching career started while attending Simpson College and continued at the same studio for the next 16 years. While there, she taught many forms of dance and a variety of ages from 2 years-high school, focusing mainly on preschool and early elementary dancers.

She brings her love for expressing feelings and ideas through music to the pool, while using her experience teaching and coaching children. She strives to find each swimmer’s passion for the sport, while fostering teamwork and respect for each other, themselves and the team. 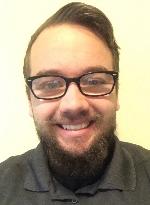 Mason Remington has been the head coach of the Marlins Indianola pracitce site since the 2020 spring/summer season. Prior to his current position, he has been an assistant coach for the Indianola and Waukee practice sites. He is currently finishing his studies at Simpson College studying math, biochemistry and computer science. Mason personally started his swimming career with the Waukee Rays and also swam for Waukee High School. His favorite stroke is breaststroke.