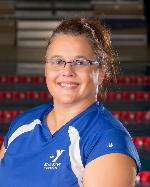 I live in State Center with my husband Jon and our two amazing kids, Michael and Molly.  I graduated from UNI and began coaching in 1997.  I became the Blue Wave head coach in 2008.  I am also the Aquatic Director for the Marshalltown YMCA-YWCA.  I love coaching and everything about it.  My favorite part about coaching is knowing that each swimmer grown up to have great memories from swimming.  I have many great memories but my favorites are the friendships and bonds I have made with my coaches, swimmers and their parents.

I am married to my amazing husband Marco and have three totally awesome kids, Anthony, Shakira and Marco. I am originally from Harlington, TX and have been an assistant coach of the Blue Wave Swim Team since 2011. I love coaching swimming and my favorite part of coaching is seeing the end result, especially when I see that the swimmers are working hard everyday at practice!  I feel that the Blue Wave swimmers have a great understanding of sportsmanship! My favorite memories are watching my baby girl accomplish all of her goals in swimming. 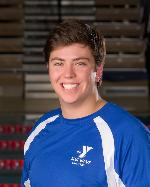 I was born in Denver, CO and moved to Marshalltown when I was 5 years old. Swimming hasn't been part of my life, it is my life!  I swam competitively for 12 years, 4 with the Blue Wave Swim Team, 4 with Marshalltown High School, and 4 year at Luther College!  Now I have the honor of coaching the sport that I love!  My favorite part of coaching is seeing the swimmers improve through the season and reaching their goals!  The memories you make in swimming last a lifetime.  This summer I was blessed to marry my best friend, Jordyn.

Born and raised in Marshalltown, I now live in Melbourne with my incredible wife Morgan and three beautiful girls; Alayna, Emery, and Reagan. I became assistant coach of the Blue Wave Swim Team at the end of 2016 when my passion for competitive swimming was reignited by watching my oldest daughter Alayna compete. The Blue Wave swim team has become full circle for me, as I was once part of this team over 19 years ago. My favorite part of coaching is sharing an experience with someone when they accomplish something that they were unable to do before. My favorite memories of swimming involve the friendships I made and the fun we had while competing. I look forward to another great Blue Wave Swim Team season!

I am married to Drew and have the most beautiful children; Alex and Ana.  I have lived in Marshalltown most of my life except the few years in Guam while Drew was serving his country.  I have been a swim official for many years and started coaching Blue Wave Swim Team in 2012.  My favorite part about coaching is watching the kids improve and their reactions when they drop time.  I have many favorite memories but one that always get me is watching kids cheer on their teammates and get excited for them.

You could say I have been involved in swimming pretty much my whole life!  For the last 45 years I have either been a swimmer, a dive coach, a synchronized swimming coach, swim official, official trainer and a parent of a swimmer!  Now I am so excited to add being a Blue Wave Coach to my resume.  I am strictly here for the kids!  I love watching them grow and learn and being a part of that makes everything worth it!  My favorite memory.....well that has to be anything to do with Jack VerHelst!  My husband Mark and I have lived in Marshalltown for the past 32 years and enjoy our grand babies and BBQ!

I was born and raised in Marshalltown and now live on an acreage with my beautiful wife Kelsey, two girls, Addilyn and Jillian, and two yellow labs, Tate and Daisy. I have work in sales, as a dispatcher, jailer and have been a police officer since 2006, currently working for the Marshalltown Police Department. The 2019/2020 season is the beginning of my swim coach adventure!  I am eager to learn and I am grateful for the opportunity to stay involved in my daughter’s swimming careers and know the value of teamwork and being a member of a sports team.  When asked about my favorite swimming memory, several come to mind.  While visiting family in Ohio one summer as a child, I was at a local attraction with my grandmother and a boy from her neighborhood.  The boy asked me if I could swim, and I  replied that I could due to taking swim lessons at the (OLD) YMCA.  The boy then pushed me into the pond that we were standing next to, making sure that I was telling the truth.  While I could swim, the water was only 18 inches deep so I was able to walk out of the pond.

I live in Marshalltown with my husband Cory and twins, Quinlan and Zoey.  We have a dog named Aayla and a cat named Bly.   I am originally from Harlan, IA.  I graduated from there and then went to Sioux City to go to Morningside College.  After my graduation in 2002, I was offered a position as a teacher with the Marshalltown Community School District and moved here.  I have been with the school district for 18 years and am currently teaching 3rd grade at Anson Elementary. I started coaching for Blue Wave in 2019 because my daughter asked me.  I also coach my son's soccer team.  I have always enjoyed recreational swimming especially going to the lake with my entire family growing up and really enjoy watching Zoey to do something she loves.