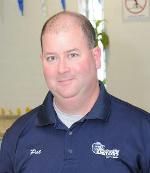 Pat Pellegrino is an assistant coach for the Gators Swim Team.
Coach Pat Pellegrino was a competitive swimmer from age 5 through age 18. He swam and dove competitively in various summer leagues including NESAL Aquatic League throughout those years and in local AAU programs at Council Rock and The George School in Newtown, Bucks County, PA during the winter seasons. He spent his high school years as a lifeguard and taught swim lessons for beginners during the summer months at Southampton Swim and Cabana Club and swam for Archbishop Wood high school during the winter.
Coach Pat attended college at West Chester University and earned his business degree. He now works for and has for the past 22 years at Giant Food Stores as a deli manager.
He has been volunteering as a coach for several years now in various other sports including football, basketball and baseball and he is very involved in the CYO athletics at Mary Mother of the Redeemer Parish. Pat looks forward to not only help in the growth of the NPY Gators swim program as a parent, but also in the growth of the children as a coach. 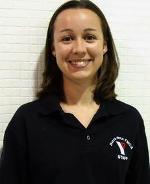 Theresa was a competitive swimmer for 10 years. She began her competitive swimming career at age 7 with the Nor-Gwyn Aquatic Club. Theresa remained a dedicated swimmer and swam every summer with the Nor-Gwyn Crabs until she graduated from North Penn High School.
For the past ten years, Theresa has worked at the North Penn YMCA as a lifeguard, swim instructor, and aquatics supervisor. She has had the opportunity to coach both summer and winter swim teams at NPY for the past four years. In addition, Theresa has coached many stroke and turn clinics.
Theresa is a graduate of East Stroudsburg University, where she majored in Elementary Education with a concentration in mathematics. In addition to working part time at the Y, Theresa works as a Director for North Penn School District's Extended School Care Program. Along with swimming for fun, Theresa enjoys spending time with her family and friends, watching Phillies games, and playing with her dog.