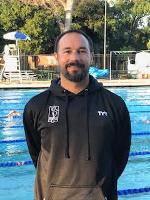 I began swimming in the Bay Area (Ca) and really took to the sport of swimming, I loved everything about it. At the same time, I began competitively swimming at a late age and it forced me to learn fast and play catch up. I had a great coaching staff helping me along the way and eventually joined a club team when I turned 16. I absorbed as much as I could and continued to apply everything I learned to my swim encyclopedia.
I was lucky enough to walk on to a DII college team (CSU Bakersfield) and develop even more from Bob Steele and David Graves. These two coaches really inspired me to learn about the development of athletes and helping them grow in and out of the water as swimmers.
In 2001 I was offered an opportunity to begin coaching with Bakersfield Swim Club with the 10 and under group. This was such a different dynamic being on the pool deck and working with these high energy, walking, and talking sponges. I was young myself (20) and was learning more about the sport at the same time as the athletes. I began reading more and more on the development of young swimmers and just the age group in general. I had so much fun working with these kids. I continued working with the 10 and unders until about 2009/2010 when I advanced up to the 11/12 age group.
In 2011, Bakersfield Swim Club had closed its doors and I needed to move on. The planets aligned and I found a new home back in the Bay Area in Menlo Park, CA. where I currently work with a great staff, community, and group of kids. As I step foot on the pool deck every day, I remember where I started and try and bring that same, energy, effort and drive to the athletes. What I hope to achieve is  that each athlete climbs out of the pool with the same wide eyed excitement that those 10 and unders had 15 years ago. 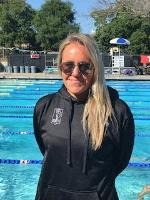 Katie was born and raised in the San Francisco Bay Area. She comes from a big swim family and started swimming with a summer league team at the age of 8. The love for the sport grew from there. She played soccer and water polo growing up, but swimming was always what she came back to. Katie has been coaching for 6 years, and has had the opportunity to be coached by, work for and work with some of the greatest swimmers and coaches in the country. She is excited to be part of the Menlo staff and looks forward to helping the swimmers improve and find a love for the sport, just as she has 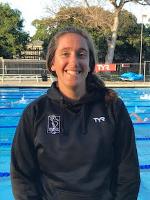 Coach Melissa has always loved the water. She has been swimming since she was very young and has been a swim instructor for over 8 years. Melissa jumped into coaching Mavericks with two feet and has enjoyed (and is enjoying) every minute of it. Melissa coaches our Level 1 and level 2 swimmers.  She enjoys working with young swimmers to build on their love of swimming and team spirit. She believes that swimming is a great sport that encompasses both individual improvements along with an awesome team dynamic. Her goal is to have every swimmer advance their swimming ability as well as their confidence… and, of course, have a great time doing it!