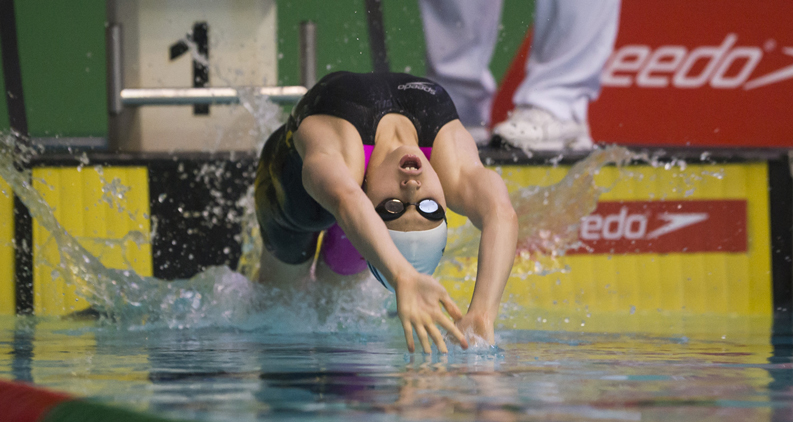 The history of backstroke swimming

Backstroke swimming developed as an offshoot of front crawl, with swimmers copying the overarm technique on their backs.

One of the most important developments in the history of backstroke was made in the late 1930s when Australian swimmers began to bend their arms for the underwater phase of the stroke.

This new technique was faster than using the traditional straight arm to pull through the water and was quickly adopted as the standard style for competitive backstroke swimming.

Another watershed moment in the history of backstroke swimming came at the 1988 Olympic Games in Seoul.

USA’s David Berkhoff qualified for the Games using a backstroke start known as the ‘Berkhoff blast-off’, where he would use a dolphin kick underwater for as long as possible, swimming faster than on the surface of the water.

The 100m Backstroke final in Seoul saw the three medallists – Japan’s Daichi Suzuki, USA’s David Berkhoff and USSR’s Igor Polianski – all swim between 30m and 35m of their first length underwater with a dolphin kick.

World governing body FINA reacted by restricting the distance a swimmer could remain submerged at the start of each length, initially to 10m, then in 1991 to 15m.

However, a year later, FINA changed the restrictions on backstroke turns, allowing swimmers to touch the wall using any part of their body rather than only their hand (although for finishes, backstrokers still need to touch with their hand).

It quickly became commonplace for backstroke swimmers to flip on to their front as they approach the wall, spin quickly underwater and touch the wall with their feet, kicking off for their next length.

The history of backstroke: The Olympic Games

Backstroke was included in the Olympic Games for the first time as a 200m event for men at the Paris Olympics in 1900.

A 100 yard Backstroke race was held instead in St Louis in 1904 (the only Olympic Games to have been contested in a 50 yard pool) before the 100m Backstroke took over in 1908.

The 100m Backstroke remained the only men’s backstroke race available at the Olympics until the 200m Back was re-introduced at the 1964 Olympics in Tokyo.

The first women’s backstroke event at the Olympics was the 100m at the 1924 Games in Paris while the women’s 200m Backstroke was added to the Olympic schedule at the 1968 Games in Mexico City.

While only the 100m and 200m Backstroke are contested at the Olympic Games, a 50m Backstroke event is held at World and continental levels.

Who was the first in the World to master underwater Dolphin kick?  Please email Coach Mark at:

What year did FINA create a rule regarding Dolpin Kicks?   Please email Coach Mark at: reddingswimteam@yahoo.com