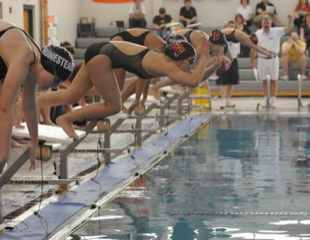 For Monique Ma, swimming at NAC Masters brings her swimming career full circle. But more on that later.

As a kid, Ma spent her early years living between the Midwest and the South.

She learned to swim in Mississippi and ended up going to college there years later.

Ma says swimming didn’t come easy as a youngster; group lessons weren’t for her. “When I was about eight or nine, my parents said, ‘You've got to learn how to swim … you can't drown.’ And they put me in private swim lessons and that's when I finally learned how to swim.”

the team was the Mississippi Makos. (Ma says she was never taught butterfly, she learned it along the way.) Then it was back to Wisconsin, where Ma swam for her high school—a very demanding team at Homestead High in Mequon, Wisconsin. But, Ma didn’t just swim in high school, she played violin in the orchestra.

“We had a really big orchestra program, so I was involved in anywhere from three to four orchestras at any point in time,” Ma says.

After high school, Ma went back to Mississippi and enrolled at The University of Mississippi where she finished both undergrad and graduate studies … getting her MBA.

“I loved the Ole Miss campus ... it's beautiful. The people were so inviting,” Ma says, but the school didn’t have a swim team. Ma missed swimming … she missed being fit. “I just love feeling strong,” she says.

So, Ma, again got her groove back in music, playing in the college orchestra and adding another instrument to her repertoire. “I said to myself, ‘Monique you are going to march in the Pride of the South (the school’s marching band).’ ” Determined to march, Ma taught herself how to play the trombone. She doesn’t really play much anymore, but says she misses it.

“I actually really miss classical music, but you know, it just kind of fell out of my life,” Ma says.

After graduating, Ma landed her “dream job,” at the Warner Music Group here in Nashville in 2017

“I love country music. I was introduced to it when I was 10 when a friend of mine gave me a Faith Hill CD for my birthday,” Ma says.

For her job, Ma says they handle mostly third-party licensing. “Whenever our music gets used in TV shows, commercials movies, third-party soundtracks,

and video games, we handle the revenues for that,” she says.  Some of the artists Ma and her team work with include Bruno Mars, Kelly Clarkson and Ed Sheeran. The job has other benefits as well.

“I've met Hunter Hayes,” she says. “ I'm a big fan of his … I love his music.” Ma says this is the right job for her –matching her MBA which was financed focused.

Ma says her goal is to get on the creative side of the music with hopes of working with songwriters.

“I'd love to be able to potentially sign songwriters and pitch songs to artists.”

Ma started swimming with NAC Masters about a year ago.

The path to Tennessee comes full circle for Ma; her first out of state meet as a kid was in the Nashville area; the swimming scene and the swimmers made a big impact on her.

“I remember seeing NAC swimmers and seeing how fast they were, and I was blown away,” she says. “John Morse’s name always stuck in my head because I really admire just how fast his swimmers are.”

When Covid-19 closed the Centennial Sportsplex earlier this year, Ma had only been back in the water for a few months. “I felt like everything just fell apart when COVID started,”

Ma said. “I literally just stayed at my house for 10 weeks.” Once practice started up again, Ma says having a routine again really helped get her back on track.

She also credits Coach Ashley Whitney’s happy spirit to getting her in the water.

“I'm very inspired by the fact that she’s an Olympian,” Ma says of Whitney.

“She’s encouraging and calls me out when my chin touches my chest during backstroke.”

When she was younger, Ma wasn’t even aware Masters programs existed.

“I always hoped that I would continue swimming eventually, because it's always been such a big part of my life,” she says. “I'm glad it's here though.”

Ma often tries to squeeze in double workouts depending on availability and, like she did as a kid, takes her time jumping in. “I actually don’t like the water,” Ma says. Being back on a team, with a coach and teammates, brings her back to being a younger swimmer. “I don’t miss throwing myself into a freezing cold pool at 5 a.m. But I definitely miss the regiment, the training and the camaraderie. I really miss competing.” Ma says racing has always been one of her favorite parts of the sport.

That racing drive will come in handy next year; Ma has her sights set on spring masters nationals in Greensboro, South Carolina.