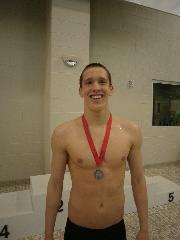 The NACS Swim Team was represented by (9) swimmers at the SPEEDO Championship Series Meet last week/weekend up in Geneva. OH (about an hour East of Cleveland).   You had to have qualifying times to compete in this meet and they are pretty tough, so just qualifying to swim is quite an accomplishment.   Our swimmers were Blaine Nichols, Brad Trahin, Brian Neibuhr, Will Schrensky, Jackson Kent, Ciana Heaston, Sarah Pushis, Courtney Kresl, and Zoe Toscos.   Teams at this meet were from Indian-Illiniois-Ohio-Michigan-Iowa-Arkansas-Lake Erie-Minnesota-Missouri Valley-North Dakota-South Dakota-Ozarks-Wisconsin and North Carolina.   NACS placed 24th out of over (80) teams that scored points and over (90) that were there and over (460) swimmers.   Some highlights were - Ciana Heaston: 21st in 200breast & 11th in 100breast, Sarah Pushis: 24th in 100back & 16th in 200back, Courtney Kresl: 22nd in 100fly, Zoe Toscos:23rd in 50free, Brian Neibuhr: 24th in 200free, Will Schrensky: 13th in 200breast and Blaine Nichols: 3rd in 100breast & 2nd in 200breast, acheiving the US Open/Nationals qualifying time standard, our Girls 400 Medley Relay: Sarah/Ciana/Courtney/Zoe - 16th and 400Free Relay: 9th.   Some pictures are attached.   CONGRATULATIONS TO ALL OF YOU!!!