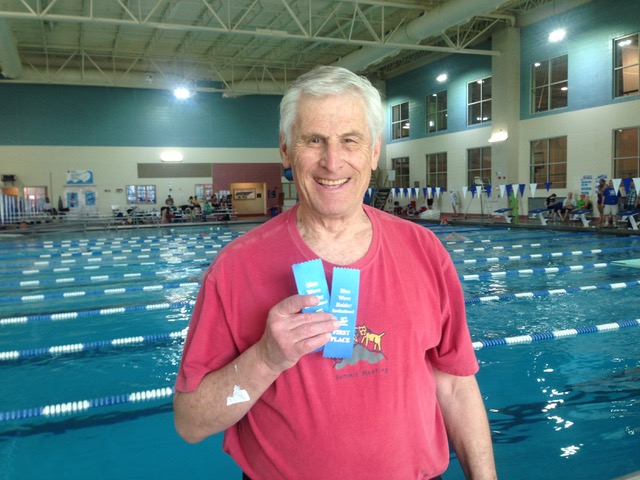 Tell us a little about yourself?

Almost nine years ago, when I was 70, I moved to Nashville from the San Francisco Bay Area; I had lived there for about 40 years to be near a grandchild.  I had been on the swim team in high school and for two years in college.  But that was in 1960 and I assumed my competitive swimming career was over.  But soon after moving to Nashville, I heard about the Senior Olympics.  I decided to start swimming again in order to participate.  Once I began working out, my love of competitive swimming came back and I began participating with the NAC Masters team. My main stroke is freestyle but I also compete in breaststroke, fly and the IM for fun.  I like sprinting events, however,  I don’t consider myself a distance swimmer.

What is your claim to fame?

I did well in the Senior Olympics in my age group and went to the Senior Games in Cleveland, Minneapolis and Birmingham.  I’ve also swam at meets in Sewanee, MSTU and, of course, NAC.  But I guess my claim to fame (if you can call it that) is that I was featured in a media campaign for St. Thomas Hospital.   They produced a television commercial showing me swimming. It ran on Nashville TV stations. Plus, my face, looking out from a pool, was prominently shown on a billboard.  I was asked to be part of the campaign because doctors at St. Thomas were impressed that I swam in a meet six weeks to the day after I had knee replacement surgery.  St. Thomas wanted to use my recovery to show others that they can recover quickly too. They must have been happy with the billboard because it remained up for aboutthree years.

Where do you live and tell us about your family?

I live in Green Hills with my wife.  Since I am retired I have flexibility on when I can swim, so I often join the Masters group at noon.  At 78, I am probably the oldest member of the NAC Masters team. I appreciate when the younger, faster swimmers let me join them, so I can pretend  I am at their level.

Why do you swim?

I swim for two main reasons.  First, because I want to stay active and I think swimming is great exercise for me.  Secondly, I am competitive and enjoy the excitement of swim meets.  One of the advantages of getting older is that there aren’t many competitors in my age group.  However, while I like to do well in meets, one of my goals is to keep my times from getting slower each year. My goal is to keep swimming as long as I can, and stay competitive in my age group.  Next year I will be able to move up to the 80 to 84 age group and that motivates me to keep working out.