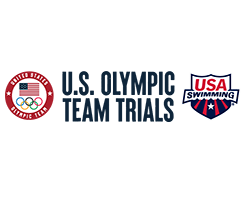 Make sure to tune in this month, you are NOT going to want to miss the action. Wave I begins this week, watch the daily prelims on www.usaswimming.org/watch and nightly finals on Olympic Channel.

NBC today announced the broadcast and streaming information for the upcoming U.S. Olympic Team Trials - Swimming, as well as three other U.S. Olympic Team Trials competitions in June. To date, this year's swim Trials include over 1,500 qualifiers who will be competing on the biggest stage in domestic swimming. Tickets to watch the nation's fastest compete in Omaha  are still available through Ticketmaster. Daily finals coverage of both Wave I and Wave II will be broadcasted across NBC channels. Along with the live finals coverage, 24 hours of preliminaries will be streamed on  NBCOlympics.com and the NBC Sports app. Wave I prelims will also be live streamed on  www.usaswimming.org/watch.