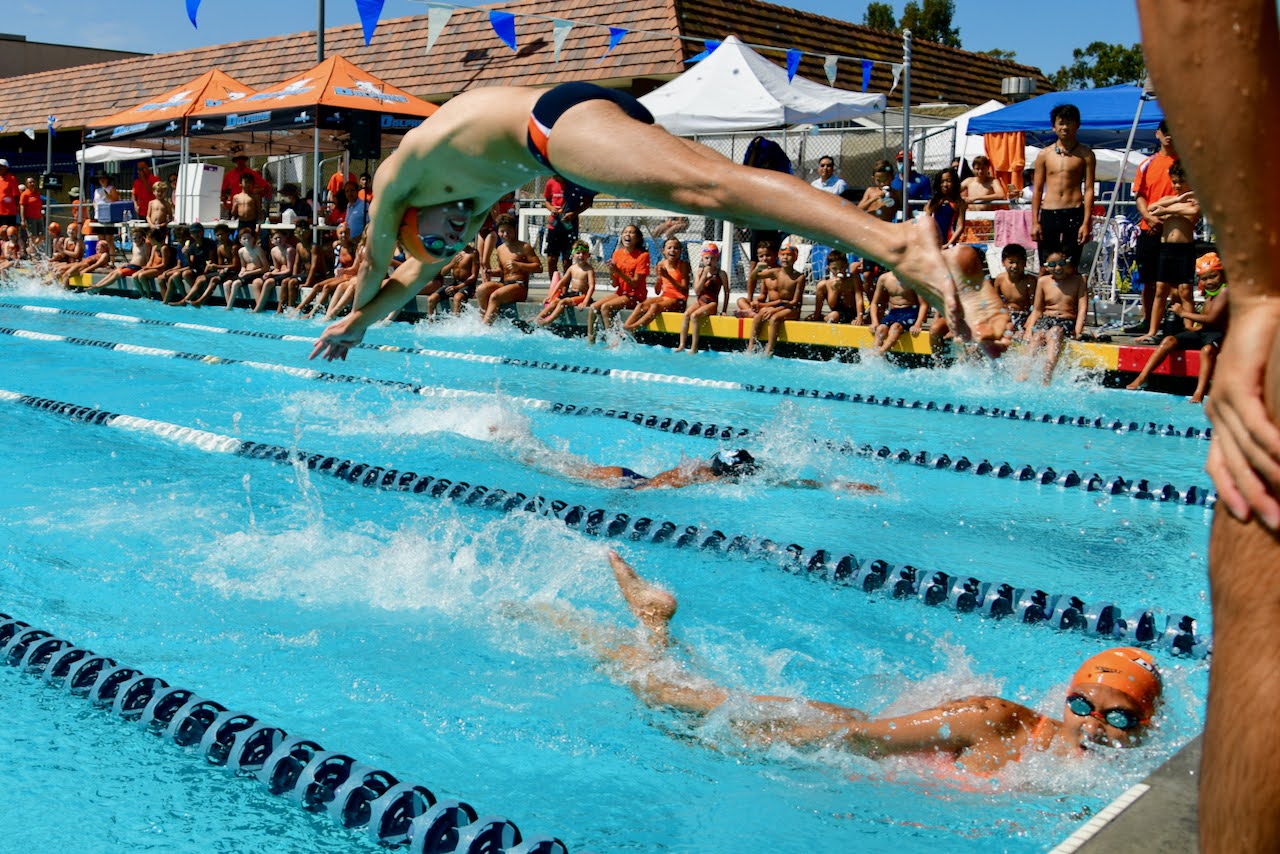 The Courtside Stingrays came in tough, announcing that the Dolphins would have to step up and do their best to contest their cross-town rivals. From the start of the relays, things looked tough, particularly when both of the top 11-12 Medley Relays were disqualified. But the 13-14 Medley Relay changed the story: Halle Ewing, Edward Lee, George Hibbard, and Noah Lee cleared the pool and claimed victory with a strong time. Inspired, the six and under boys (Levi Bouhbot, Aksel Varnali, Adam Ward, and Joshua Lerner) took the top 4 slots in the 25 Butterfly. The season is going fast, but the Dolphins are going faster!

Once the new tone was set, Dolphin victories accumulated. In the Boys 25 Backstroke Cassius Espiritu (6) and Guilherme Falleiros Friggi (8) claimed top spots. In the 50 Back, Grace Baek (10), Sophia Veravanich (11), Brian Rezaee (12), Anna Soriano (14), Holden LeVine (14), and Coach Annika all claimed the top spot in their age groups. Grace Baek and Amie Antonio both posted impressive victories in the 100 Individual Medley, finishing quickly enough to take a breath and enjoy watching the rest of the racers touch the wall and offer commentary. Marco Tirado scorched a 1:06 to win the 11-12 100 IM, and Holden LeVine and Julie Shabanie claimed victory in their age groups.

Dolphins dove and breached and spouted; it was a beautiful sight!

The 13-14 group wasn’t quite done. The 200 Free Relay team of Handerson Lee, George Hibbard, Anna Soriano, and Holden LeVine put a bow on the meet, posting a devastating time of 1:40.07. That fearsome foursome set a new South Irvine Dolphins World Record, beating the old time of 1:41.38, set way back in 2010, by an exceptional group of future coaches: Judson Balding, Alex Bennett, Julia Knoell, and Philip Wright, set at the ISL Championships more than a decade ago. Fortunately, Coach Julia and Coach Philip were there to cheer the younger Dolphins on! Ten years is a long time for a Dolphins record to last, and these impressive young Dolphins aren’t done yet.

And, as the Irvine Championship meet draws near, the impressive list of Dolphins with Qualifying Times continues to grow. New Qualifiers included Yousef Afifi, Aidan Antonio, Amie Antonio, Lara Blanco, Micah Bouhbot, Pierce Fournier, Kennedy Smith, and Nicolas Tsai. (Remember, every Dolphin can swim one event in Champs; those with Qualifying Times can swim up to three individual events.)

When Covid is a distant memory, people will still tell stories about the Dolphin season of 2021.

Check out the meet pictures by clicking here.