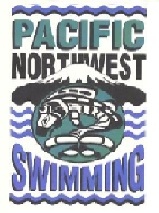 The Sharks had a great showing at the 2022 LCM Age Group Champs! It was a long four (and hot!) days at the King County Aquatic Center, but the athletes did a great job of bringing energy and enthusiasm each day. We saw some great performances and awesome support from the Sharks. Thank you to all who volunteered to time at the meet and came to watch from the stands - It means a lot to hear you cheer when UPAC names are announced! Overall, UPAC was able to squeak past SRST on the final day of competition for a 15th place finish in combined scoring!

Alex and Brooklyn  were joined by Tess Hurguy (11), Audrey Keigley (12), Audrey LaTendresse (12), and Emma Slagle (11), who earned finals swims in one or more of their events.

Alex Karpenko (12) - I was most impressed with Alex’s 200 IM, where he went into the meet seeded 12th, dropped 13 seconds in prelims to earn a spot in the A final, and dropped 5 more seconds in finals to finish 4th overall!

Audrey Kiegley (12) - Audrey had a stellar meet a week out of Champs and continued to show growth by dropping another half second in her 50 LCM fly and earning a finals swim!

Audrey LaTendress (12) - Audrey crushed her leg of the 400 Medley Relay, swimming the freestyle anchor in a time of 1:12.19, helping her relay to a 7th place finish!

Brooklyn Learned (12) - swam the final individual race for the Sharks in the 200 LCM back. In prelims, Brooklyn dropped 2 seconds of her lifetime best to earn a spot in the A finals as the 7th seed, then she 4 more seconds in finals, racing to the wall for a 4th place finish!

Sam Neely (11) - dropped an insane 18 seconds on his 200 LCM back! The improvements he has been making on his turns in practice were apparent during that race.

Axel Newman (11) - swam with great confidence in the 200 LCM freestyle, dropping 6 and a half seconds from his lifetime best!

Greta Patterson (13) - showed some tremendous improvements in power on the 100 LCM free, where she dropped a staggering 5 seconds from her lifetime best and got under the 1:10 mark!

Emma Slagle (11) - earned her first A finals Champs swim in the 50 LCM breast by getting under the 40 second mark for the first time, and ultimately finishing in 5th place.

Gigi Valle (10) - had a great showing at her first Champs meet! Gigi dropped time and/or improved her place in all 3 of her events, but I was most proud of her 100 LCM free, where she dropped over 7 seconds from her lifetime best.