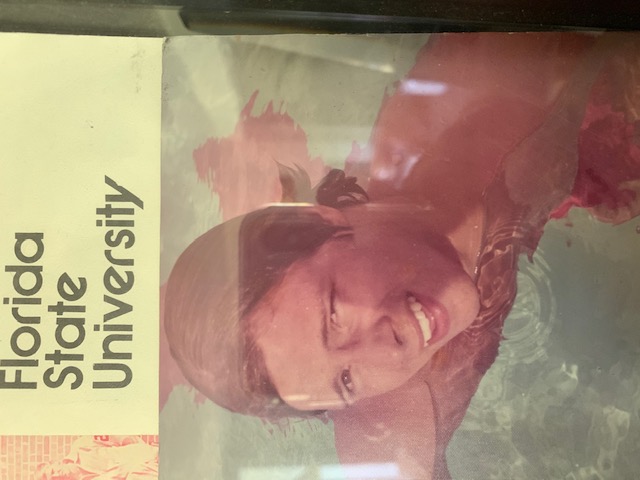 You’ve probably seen Larry Lovelace sauntering around the pool most mornings, taking his time getting in. Here are some things you probably didn’t know about him.

How did you start swimming?

In 1963 … the coach at Old Hickory Country Club needed a swimmer for the 10-and-under relays. I took the bait and dove right in and the rest, they say, is history. At age 13, I started year-round training at West Side Victory … the predecessor to NAC. In 1972 all the training paid off, as I was lucky enough to get a full-ride at Florida State University. During my summer break, I coached swimming back here in Nashville.

Why do you keep swimming?

My coach at FSU said to us college swimmers, “You guys are in the best shape of your lives and if you just stay with swimming over the years, it will pay great dividends.” So, I basically have never stopped swimming. I get in the water a few days a week at the ripe old age of 65.  I don’t think I’ve ever gone longer than three weeks out of the water in the past 45 years, except when I had surgery. In past years, I’d train hard about every 5 years to go to Masters Nationals or Worlds. Twenty-five years ago, I got 6th at Worlds in the 100 fly at the age of 40. I think that’s probably the most competitive I’ve been in my golden years.

How has swimming changed since you first entered the water?

When I was a kid in age group and college swimming, nobody wore goggles. You can remember Mark Spitz winning seven gold medals with no goggles! Our first goggles were big rubber ones with “real” glass over each eye.   Some days I wish I still had those when my goggles fog up!

Tell us about your family and the connection to swimming.

We have two sons, Curtis and Chase.   Curtis swam his first 25 yards at the FSU pool where I swam in college when he was 4-years old. Chase swam his first 25 at our club when he was 3. We just had a lot of fun … going to the ‘Y’ on Saturdays to mess around in the pool. On New Years Eve, we would do family obstacle courses and other fun events. We did not force Chase and Curtis to swim and many times I would tell them not to go to practice. Thankfully John Morse didn’t give me too much crap.  Hah! Both our boys became great swimmers. One of the proudest moments for me was when Curtis was a senior and Chase was a freshman at MBA and they finished first and second in the state in the 100 breast and 200 IM.  Chase ended up developing a medical condition and wasn’t able to swim in college.  Curtis became number one in breaststroke in high school and ended up going to Stanford where he was a13-time All American and National Team member.  He swam in Australia and China and in three Olympic Trials (2008, 2012 and 2016).  He recently married Tanya Krisman who was a great butterflier at the University of Southern Calif. Curtis best finish at Trials was tenth.  His wife Tanya once finished fourth!

My sons made swimming fun again for both me and my wife Becky.  Becky was a runner and not a swimmer. But when she was expecting Curtis she began to swim and got up to a mile a day.

What gets you up in the morning for practice?

One of my favorite things to do now is meet and catch up with Curtis or Chase at Dunkin Donuts after morning workout. I am blessed that they both work in Nashville.  Curtis is a partner with IC Thomason Engineering and Chase is a CPA with E&Y.

I recently retired after 40 years in banking; I was regional president of Regions and Green Banks.

I just swim for conditioning now and enjoy it more.

When friends see me and hear I’m still swimming, they say, ‘Hey, you look so young!’ It kills my wife.