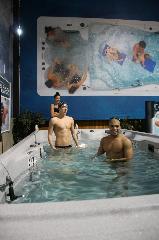 Last week three(3) of our NACS High School Group Swimmers, Sydney Bull-Jalen Walker-Blaine Nichols, got a chance to take a "Micheal Phelps Challenge" in a Master Spas specially designed Michael Phelps Signature Spas.   Master Spas, a Fort Wayne based company, has developed a new line of Spas that Michael Phelps is a spokesman for.   They will soon be launching a Nationwide promotion where individuals will be able to go to a Licensed/Approved Mater Spas Dealer and take the "Michael Phelps Challenge"   The only approved location in Indiana is at their Corporate Headquarters in in Fort Wayne,   The challenge is to see if you can swim at Michael Phelps "training pace" for 3-minutes.   There will be special gifts, awards, drawings, etc. along with a DVD of your underwater stroke also provided.   They were needing a few swimmers to "treak" a few things prior to launching this promotion and that's where Sydney, Jalen and Blaine came in.    There are some photos attached.