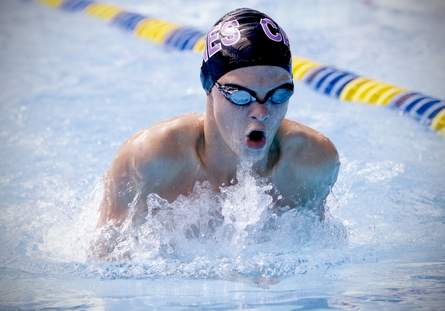 When districts changed starting this school year, Gainesville's chances of repeating a league sweep in swimming, especially in girls, looked shaky with the quality addition of three-time defending Class 2A champions Tallahassee Chiles.

But a little strategy by Hurricanes coach Rob Ramirez on Saturday at the O'Connell Center, relying on his team's depth, winning two of three relays and placing two divers in the final event could result in victory.

It did — by five points.

Sophomore Courtney Bryant had the Hurricanes' only individual win in the girls in the 100-yard backstroke, but victories in the 200 medley and 200 free relays and their edge in depth led up to the diving portion at the end of the meet.

Junior Kacy Rodriguez and sophomore Paige Basting placed third and fourth, respectively, picking up 31 points and giving GHS an 11-point edge in the event over Chiles, pushing it to the District 3-3A title. GHS finished with 468 points with Chiles right behind at 463.

“We knew with them (Chiles) being three-time state champions coming in here, if we could use our depth like we did at city, if we could put four girls in the top eight as many times as we could and win two of the three relays and our wonderful divers contributing 31 points at the end, we would have enough firepower,” Ramirez said. “Our first goal was to knock off Buchholz and that is never an easy task. And to go undefeated in dual meets, win city and districts, place in the top three at regions and top 10 at state.

“But both our divers at the end, Paige Basting and Kacy Rodriguez, provided a complete across the board effort to put us in position to win.”

It wasn't so close in the boys as GHS cruised to its fourth straight district title, winning six of the 10 individual events and all three relays. Both Max Bungert (200 free, 500 free) and Cameron Guy (200 individual medley, 100 free) had a pair of individual wins and were on two of the three winning relays. Also winning individual events were Lance Reccoppa (50 free) and Parker Basting (100 breaststroke).

“I think the biggest thing with this group of seniors is they are on autopilot, “Ramirez said. “I didn't put together this district lineup, my boys did. They knew what they had to do.

“A lot of our kids on the guys side were tired today and they had to dig down deep for these swims so we can advance to regionals and advance to state and make a run at the championship.”

GHS will send its entire boys and girls teams to Thursday's regionals at Cecil Aquatic Center in Jacksonville. In the last four years, the 'Canes' boys team have finished second (2009), second (2010), first (2011) and third (2012). Ramirez believes his boys can make another run at their second state title in three years.

REGION 1-2A: Stanford commit and All-American Wesley Olmsted of Eastside won both the 100 free (46.69) and 100 back (50.89) Friday night in Pensacola as the Rams finished sixth in boys and fourth in girls.

Sophomore Meera Srinivasan took fourth in the 100 fly, Alicia Frazer fourth in diving and Andy Zhong fifth in the 100 breast for Eastside, which also qualified its 200 medley relay teams for both boys and girls. The Rams will send 12 swimmers to Saturday's Class 2A state meet at Sailfish Splashpark Aquatic Athletics Center in Stuart.