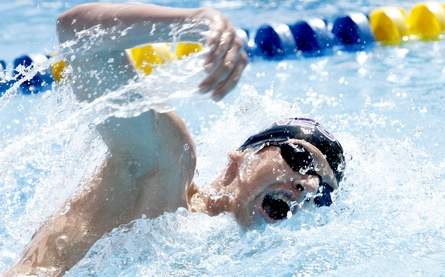 “I can't say enough about this class, the most decorated class in my 27 years in coaching,” GHS coach Rob Ramirez said. “We came in to the finals up 19 points, but Belen Jesuit is a tough team to beat. We were hungry and swam a really good meet, but my hat's off to Belen Jesuit.”

The meet came down to the final event, the 400 Free Relay, with Belen Jesuit up by one point over GHS. Belen Jesuit won it, with Gainesville's team of Cameron Guy, Brandon Parramore, Seth Borgert and Cric Geunes finishing in third.

Belen Jesuit coach Kurt Pappas and Ramirez have been competing against each other since they were in high school in the early 1970s, through college and now in coaching.

“I can't say enough about both sides,” Ramirez said. “They laid it on the line for me as a coach and for Gainesville High School.”

Leading the way for the Hurricanes was the first-place finish of the boys 200 medley relay team of Borgert, Guy, Parker Basting and Max Bungert.

Other top finishes for the Hurricane boys were Guy with a second place in the 200 IM, Rafael Davila was third in the 500 Free and the third-place finish of the 200 Free Relay team of Bungert, Parramore, Geunes and Basting.

Columbia's Hannah Burns captured the 200 individual medley title for the second straight season and finishes second in the 500 free. Lindsay Lee was third in the 100 Back for Columbia.