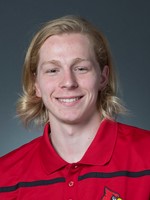 HSA Alumni and Louisville Cardinal Swimmer Zach Harting competed in the Men's 200 Meter Fly on Tuesday June 28th. After the morning sessions Zach was in the 11th position having finished in a personal best time of 1:57.94. Zach's reward was a spot in the Semi Finals on Tuesday evening in the same heat as Michael Phelps.
In typical Zach style Zach entered the pool during the athlete walk in like a SUPER HERO wearing his Batman Mask and Cape. In a star studded heat Zach was in the middle of the pack after 100 meters but as they approached the 150 meter mark our caped cruisader made his move turning for home only behind Michael Phelps and holding on for a 3rd place finish in the heat and a place in the Finals on Wednesday night. Zach dropped almost 1 full second to qualify for the finals on Tuesday turingin in a time of 1:56.99.
Wednesday night Zach competed in the Finals. US Olympic Star Michael Phelps and NCAA Champion Tom Shields led start to finish, but in a very tight race for 3rd place Zach was able to move into the 3rd position during the last 50 meters before being overcome; finishing in 7th place with a time of 1:56.92. Third place through 7th place were only seperated by a meer 47 100th's of a second, talk about a close finish.
It was awesome watching Zach race and I can hardly wait to keep up with Zach's swimming career in the future!
Way to go Zach, HSA is proud of you and wishes you all the best! Zach is the Highest placing HSA swimmer at the US Olympic Trials since John Piersma in 1996. John made the Olympic team in 1996 competing in the 200 and 400 meter free.
You can find the Omega Timing link for live results HERE.
Zach's Cardinal Bio can be found HERE
Information about Olympic Trials can be found HERE