U.S. Rep. Jim Bridenstine made a guest appearance at the KMSC Annual Spring Banquet in late March, much to the surprise of everyone except the head coaches. His purpose: to recognize one of our teammates.

Bridenstine, a former competitive swimmer who represented Rice University through college, took the podium after being introduced by Coach Kathy Mendez’s husband, Robert. During his speech, Bridenstine recalled an opponent who always took the time to shake hands with other swimmers before or after races. This sportsmanship made an impact on his dad and him, and he followed suit.

Now, Bridenstine’s own son is swimming competitively for Jenks Aquatic Club in Tulsa.

While attending the recent OKS Short-Course State Championships in Mitch Park, Bridenstine was cheering on the Jenks 10 & under boys relay on the final day of competition. Bridenstine had watched each day as the Marlins’ relays turned in impressive wins. But in this race, Jenks had taken the lead. The final relay legs dove in and the KMSC anchor did everything he could to close the gap. Alas, victory would go to Jenks.

It was in this moment that Bridenstine witnessed the sportsmanship he recalled from his swimming days. KMSC swimmer Barrett Jones, who had anchored the relay, swam to the Jenks lane and shook his opponent’s hand, congratulating him on his victory.

Bridenstine was so moved by this moment, that he called the KMSC coaches days later with a request: He wanted to award Barrett a Special Congressional Recognition for showing outstanding sportsmanship in his community. The coaches invited Bridenstine to give the award at the team banquet. 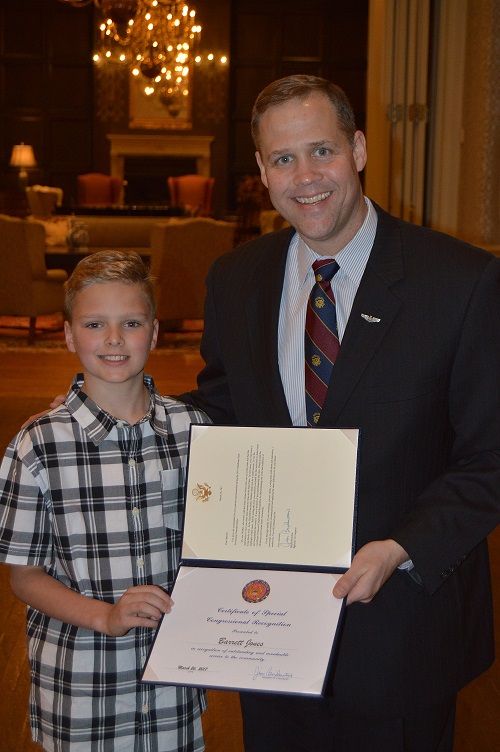 Barrett was surprised to receive the award – he had expected a senior swimmer to be recognized – but says sportsmanship is important to him.

“Sportsmanship is important so that each of us can be the best that we were created to be,” Barrett says. “I always want to encourage others to be their best – whatever that looks like for them.”

What about that memorable relay swim?

“It was a great race and I got to swim with some of my best friends,” Barrett recalls. “We were behind, and I was the anchor. Unfortunately, I couldn’t make up the difference, but we still had fun!”

Coach Mendez, who coaches Barrett in the Purple training group, says sportsmanship is one of the many lessons the staff tries to instill in each Marlin, from Prep to National level.

“Swimming teaches great life lessons,” Mendez says. “We hope to develop our athletes’ character and life skills just as much as their swimming technique. “