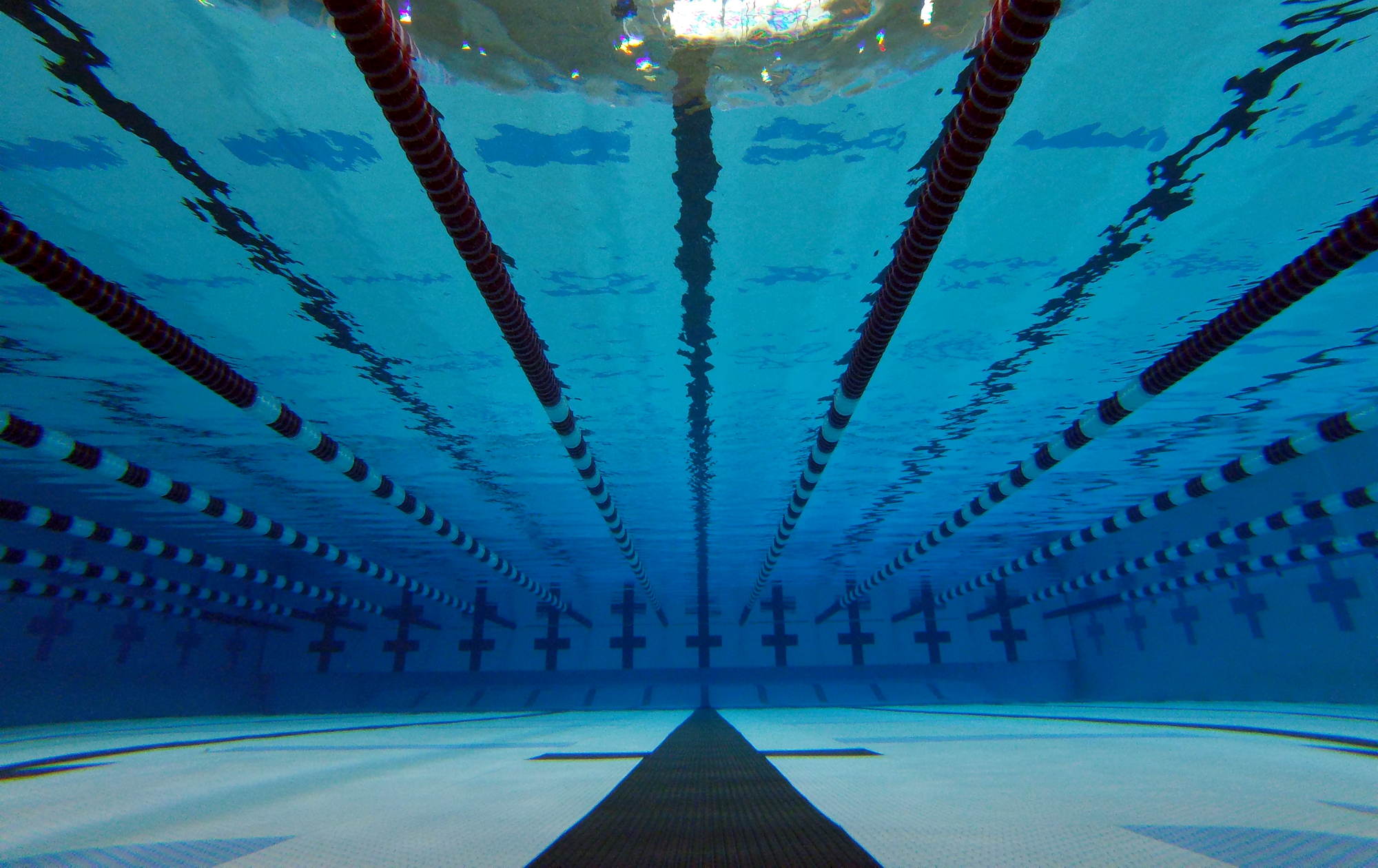 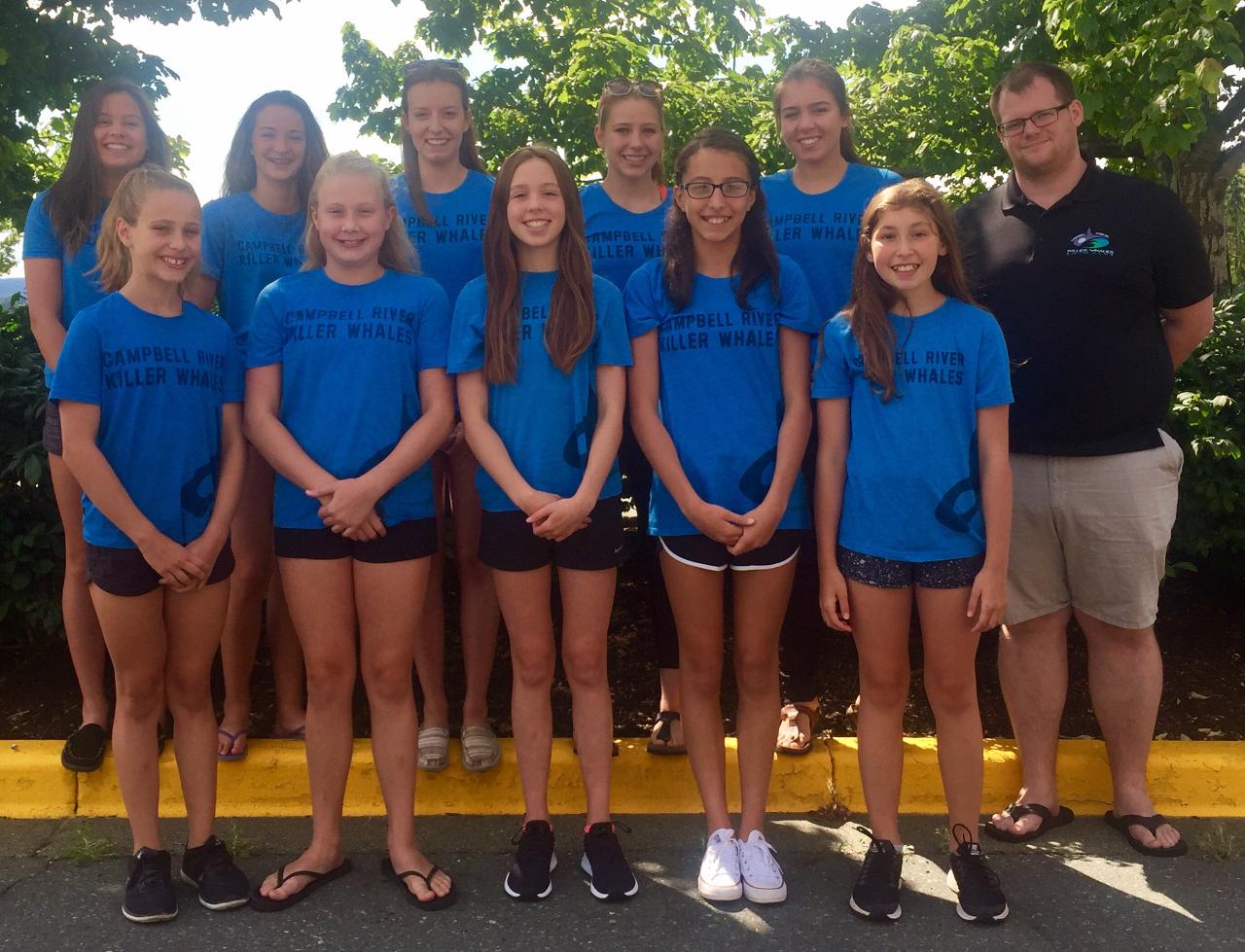 Best Ever Team Finish For Killer Whales At Provincials

The Campbell River Killer Whales just arrived home from the Swim BC Long Course AAA Championship in scorching hot Kamloops where they set a new club best, finishing third in women’s team points. This was quite the feat considering the rich history of talent CRKW has produced over the years. The local club sent 11 girls to the championship meet and were up against big city clubs with at least double the entrants.

Over the grueling four day meet CRKW compiled a total of 18 individual medals and 3 relay medals. Kara Beauregard, Summer Wenger, Kaya Lathangue, Brooke Wenger, Martina Montana and Ava Simard all donned Killer Whale blue on the individual podium. Even more impressive was the girls 12 year old and under team of Beauregard, S Wenger, Lathangue and Montana tripling up, finishing third in BC in each of their relay events that featured three eleven year olds on the roster.

Beauregard (12) was competing individually in the 12/13 year old division and showed she could hold her own with the older girls. Her strengths are middle/long distance freestyle and backstroke and she did what most expected. Beauregard captured 1 gold, 3 silver, 2 bronze medals, and an astounding 8 club records all in one meet. Top swims came in the 200 backstroke, 50 backstroke, 200 freestyle and 800 freestyle.

S. Wenger led CRKW in points where she was right in the middle of the action each night in finals. She was no stranger to the podium either, amassing   5 individual podium finishes including 2 silver, 3 bronze and out of her eight events 5th was her lowest finish. Best swims for S.Wenger were the 200 free, 200 backstroke and 50 backstroke.

Four more eleven year olds combined for the majority of the remaining points. Lathangue had another monster meet consistently taking time off all week. She won 3 medals including huge swims in the 400 and 800 freestyle events as well as the 50 backstroke , where Lathangue has been no stranger to success all season long. Montana was also big force for CRKW , proving her late season surge to be the real deal. She took off 35 seconds in her 800 free to come out of nowhere to  challenge the leaders finishing a solid 3rd to go along with 5 more top eight finishes including another bronze in the 400 freestyle. Simard rounded out the medals in the 11 and under cat for CRKW going on her personal best and cruising to bronze in the 50 breaststroke on day 2 of competition and closing out her big meet with 5 best times. Kira Dunn was another huge contributor throughout the provincials, gathering points in 2 of her 5 events. Kira’s growth this season has been phenomenal and has shown she’s ready to challenge the top girls in the country her age.

B. Wenger was the sole 13 year old representing the Killer Whales and was the first on the team to win gold in Kamloops. Wenger won the 50 fly, nearly breaking the 30 sec barrier and managed to accumulate crucial points in all eight events entered at AAA’s.

CRKW’s most senior swimmer competing, Cianna Dunn was within 6 one hundredths off of getting on the podium in her 50 back. C. Dunn is one of the top 18 and under backstrokers in the province and showed that as well in the 200 backstroke qualifying for “A” finals and finishing 8th in the 200.

Incredibly each of the eleven Killer Whales earned points. Aleah Jordan had one of her best meets of the season going big personal best in the 50 backstroke and right on her 50 breaststroke top time, grabbing big points in both events. Ali Beck, a freestyle specialist was great in a stacked meet of amazing freestyler’s. She earned a spot in the 400 freestyle final after moving up 13 spots from her entry ranking, earning more valuable team points and experience. Veteran and team leader for CRKW, Melayna Beaudin showed fight all week while going on her personal best in the killer 200 fly, making finals and contributing to the all important team point total. She also anchored the freestyle portion of the 4X100 Medley relay by going her second fastest relay split ever.

CRKW saw continued success at the Open Water championship in Salmon Arm immediately following the meet. Four of the Campbell River swimmers continued on with Beauregard winning the 11/12 year old category finishing with the fastest time for both male and female swimmers. Lathangue finished 4th overall but as the top 11 year old followed closely by teammates Montana, and Simard.

Overall this is exactly what Head Coach Jim Campbell likes to see. Contributions from the entire team really make this a special way to end the season for most of the team. Coach Campbell next will travel to Toronto with CRKW’s lone Canadian Junior qualifier Brooke Wenger. Wenger will compete July 26th-30th at the Toronto Pan Am Sports Center, competing in the 100 butterfly, 200 butterfly, 400 freestyle and 800 freestyle events.