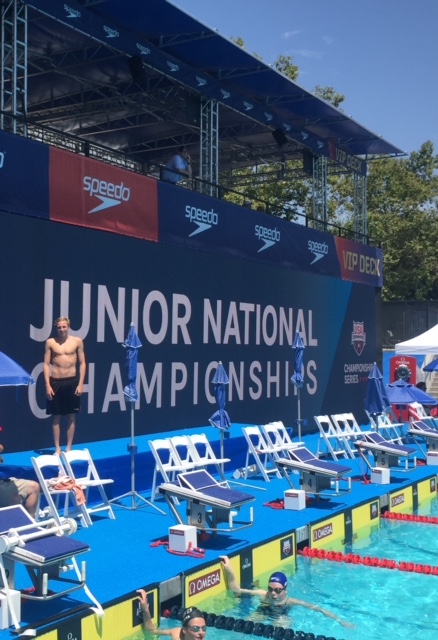 Cole Kuster returns to New England after wrapping up a truly awesome performance at the 2018 Speedo Junior Nationals swim meet in Irvine, California. Cole qualified to swim not only the 1500 meter freestyle, but also the 400 meter freestyle and the 800 meter freestyle at Juniors Nationals. It was at the William Woollett, Jr. Aquatic Center where Cole competed against some of the fastest swimmers in the country from July 31st-August 4th. This swim meet brings excitement, fast athletes and another great level of competition for Cole!

Racing extremely well and doing a great job of handling himself at the highest level meet that he has ever been a part of, Cole managed not to let the events, crowds or situations overwhelm him as he came away with some amazing swims. Cole rounded out the weekend with 4 of 5 best times and you can’t ask for much more than that at a meet of this caliber.

When asked how the meet went, Cole responded that he was extremely pleased with how he swam but is still hungry for even more next time out! Congratulations on an amazing weekend Cole!