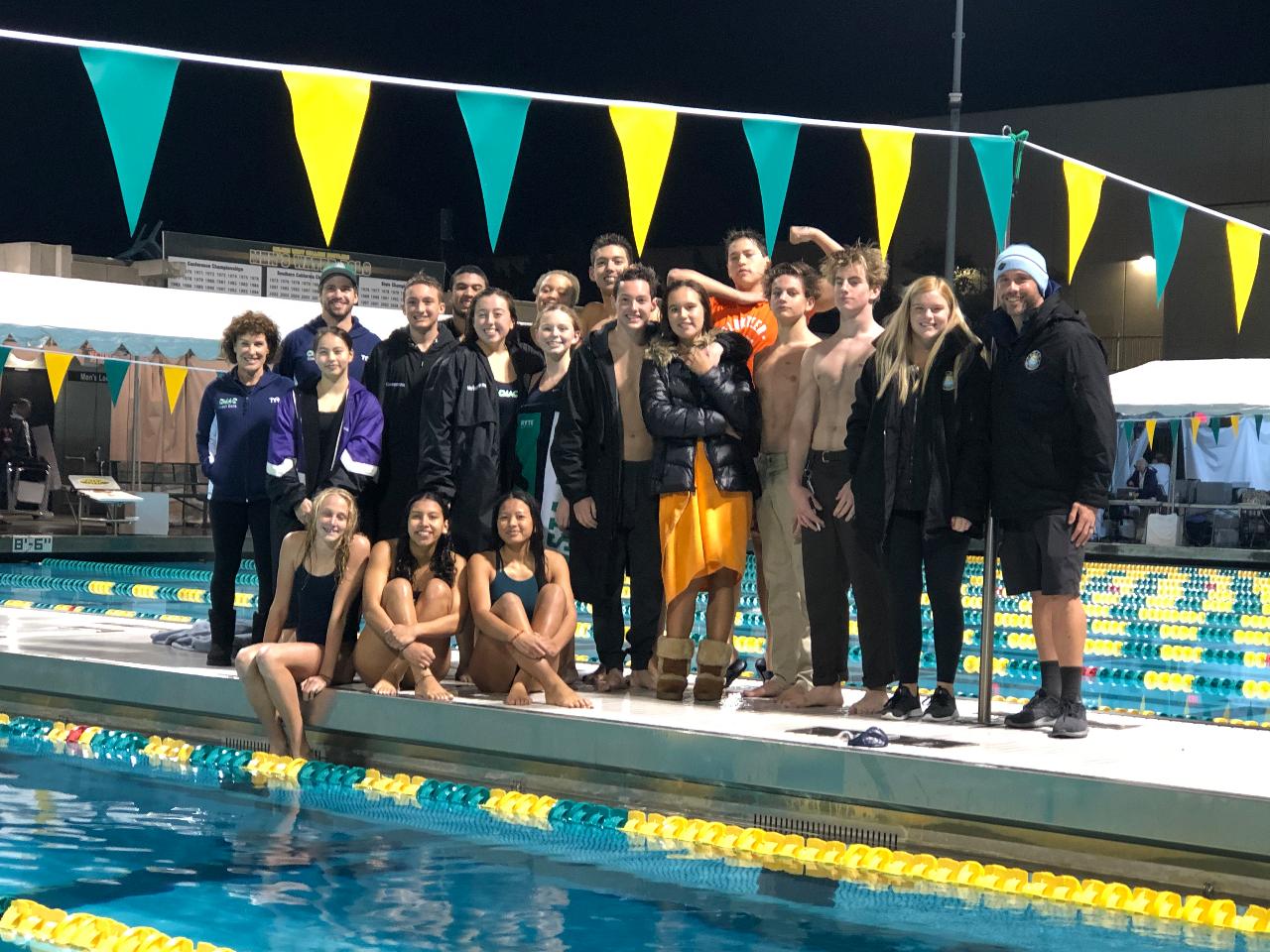 After a trying week of rain, floods and lightning storm warnings, the clouds parted, the rain stopped, and there was a beautiful three-day window of sun and cool temperatures as the WAG Championship team from CMAC arrived at Golden West College last weekend. This meet was new territory for many from the team, but that did not discourage them from collectively putting together the best group performance to date in recent memory.

The Winter Age Group Championships is a qualifying event of near-Junior Olympic standards, and it was home to 50+ swim teams from across Southern California Swimming. There were two additional WAG sites (Palm Springs, and Santa Barbara) that also saw competition over the same three days. The top 3 teams in our meet were long-time powerhouse programs Mission Viejo, Beach Cities, and Rosebowl Aquatics. CMAC finished strong in 27th, with 95 points, in arguably the deepest WAG site ever. It was certainly a performance to be proud of.

The charge for points was spearheaded by two of our younger boys, Avrum Xagorararkis (10) and Aidan Arie (11). Each swam 6 events, and went 6-for-6 in lifetime best performances. They combined for 50 of CMAC’s 95 points. Joining them in the perfect lifetime best club were Maddie Stein (13) 2/2, Kira Anderson (13) 2/2, Cole Constantino (14) 6/6, Jacob Stephen (14) 3/3, and Karolina Sangasy (10) 3/3. In fact, 94% of CMAC swims were lifetime bests, many by very large margins! Many of our athletes discovered that they may be better swimmers than they have let themselves believe.

While almost impossible to give a “swim of the meet” performance due to the multitude of unreal efforts, Maddie Stein’s end of meet anchor leg in the 13-14 girls 400 freestyle relay was certainly one of the swims the coaches will remember most. Maddie spent the weekend juggling swimming and cheer competitions, and in her 7th race of the meet, along with Vera Allen (13), Mila Aguilar (13), and Kira Anderson (13), Maddie swam a gutsy anchor leg to move past the leading team to take a heat victory, and 15th place in the event. Her 55.81 split in the 100 freestyle definitely had the coaching staff thinking about this bright young star’s future. Her teammate, Kira Anderson, also juggled a multisport weekend of swimming and Olympic Development Water Polo, and swam an equally impressive anchor leg in the longer, 800 freestyle relay. Her relay team took 14th, notably due to the huge anchor swim of 2:01.80, which was a lifetime best swim by nearly 7 seconds. These swims, among MANY others, were just some of the highlights over the weekend.

While time drops and results are impressive and noteworthy, what was more noticeable was the overall improvement of the team at a baseline level. There were a number of swims where CMAC saw heat winners – often from outside lanes (the slower seed times in the heat). This showed determination, a willingness to race and compete, and a sense of confidence that has been absent from the team as a whole. It was obvious to the coaching staff, the athletes, and to many on the pool deck throughout the meet that CMAC was there to do their best, and that is what makes us proudest!

Congratulations to all who competed, cheered, supported, and made this event one that will stay in everyone’s memory for some time to come. We now move into the “Holiday Season” where we will be decompressing from the high focused training, and honing in on the technical areas in need of improvement before we begin our next build up to whatever spring end of season meet the athletes will compete in. Thanks again to everyone.