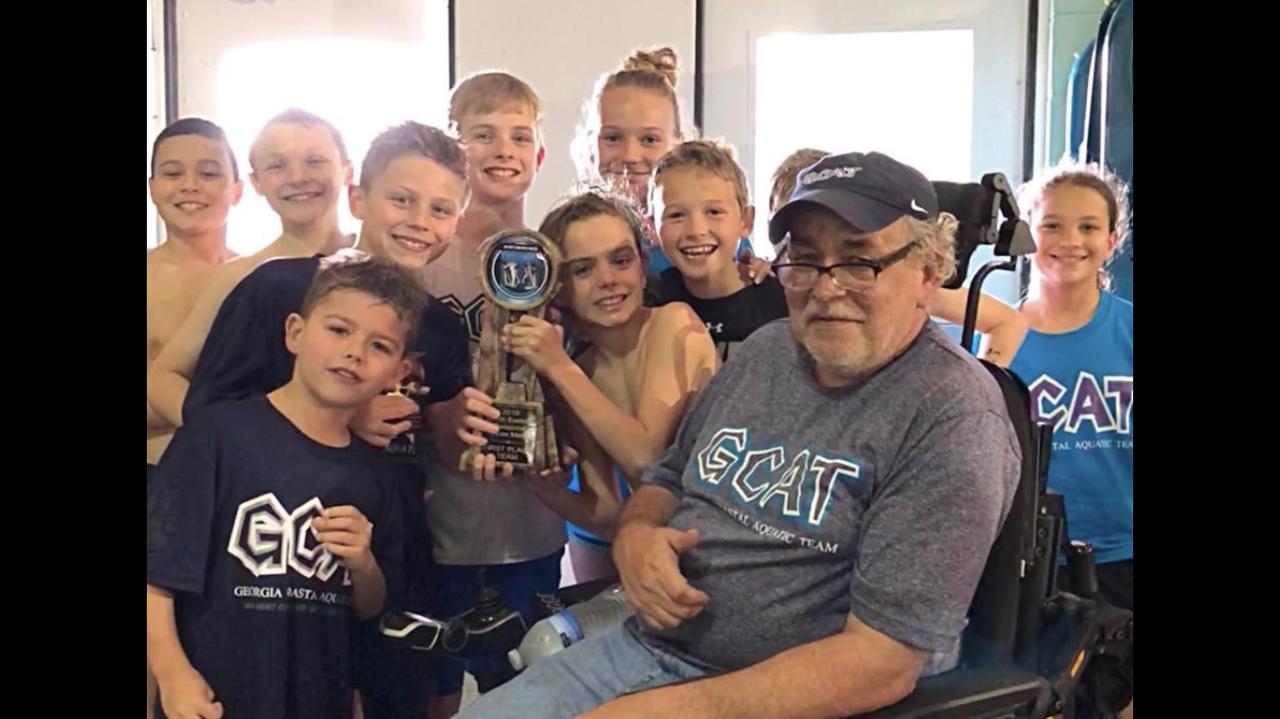 It is with a very heavy heart that we remember our beloved Coach Walt.  He passed away after a brief battle with cancer on 1/19/2019.  Please keep his family in your prayers.  We will pass along any information about services once we hear from his family.

Please enjoy the beautiful description of his life that was read as he was presented with the Lifetime Commitment to Swimming Award ceremony in October 2018.

The stories read like those of a super hero.  Struck by lightning, not once but twice.  A man who speaks five languages fluently. He swam from Alcatraz to the San Francisco Bay Harbor.   Oh, and he once rode his son to the hospital to get dire medical treatment on a horse.

But these stories are not from the pages of comic books; they are the life imprint of a man GCAT swimmers have fondly known as Coach Walt. Walt Weed was born on November 7, 1953 in Reading Pennsylvania.  After graduating from the Georgia Military College in Milledgeville, Georgia he went on to work in College Admissions, for the Navy’s office of Naval Intelligence, as a self-proprietor, and for GCAT Swim Club for the next sixty years.

In the Navy, he worked as a peace consultant reaching out during the turbulent Vietnam years to local village leaders to create opportunities for dialogue and peaceful reconciliation.  While superhero-esque in itself, Walt’s ability to speak fluently five languages was used as a way to create peace, not further conflict.  The soft-spoken, wisdom became more like Doctor Xavier from X-Men than Thor or Batman.    His penchant for finding peace translated well to his ability to coach our kids in the pool.

Walt could be seen any given afternoon at the edge of the pool.  If you didn’t know any better you might think that he was there just to watch.  But as swimmer after swimmer exits the pool, Walt offers a soft word of stroke correction.  He sees the little things – and a slight softly spoken word passed along transforms swimmers inch by inch.  In an age where coaches scream on the sidelines in other sports to get kids attention, Walt merely speaks and kids listen.   It’s a powerful reminder that bluster and bravado have nothing on substance and merit.

Coach Walt has for years motivated, challenged, nurtured, and improved GCAT Swimmers.   His ability to speak wisdom, to relate to kids fifty years younger, and communicate in a way that has made them better swimmers and better people is profound.  As we think on it, I’m pretty sure that Walt is a Superhero – a real life, in the flesh Dr. Xavier has been in our midst this whole time.  I wonder how many of us knew.