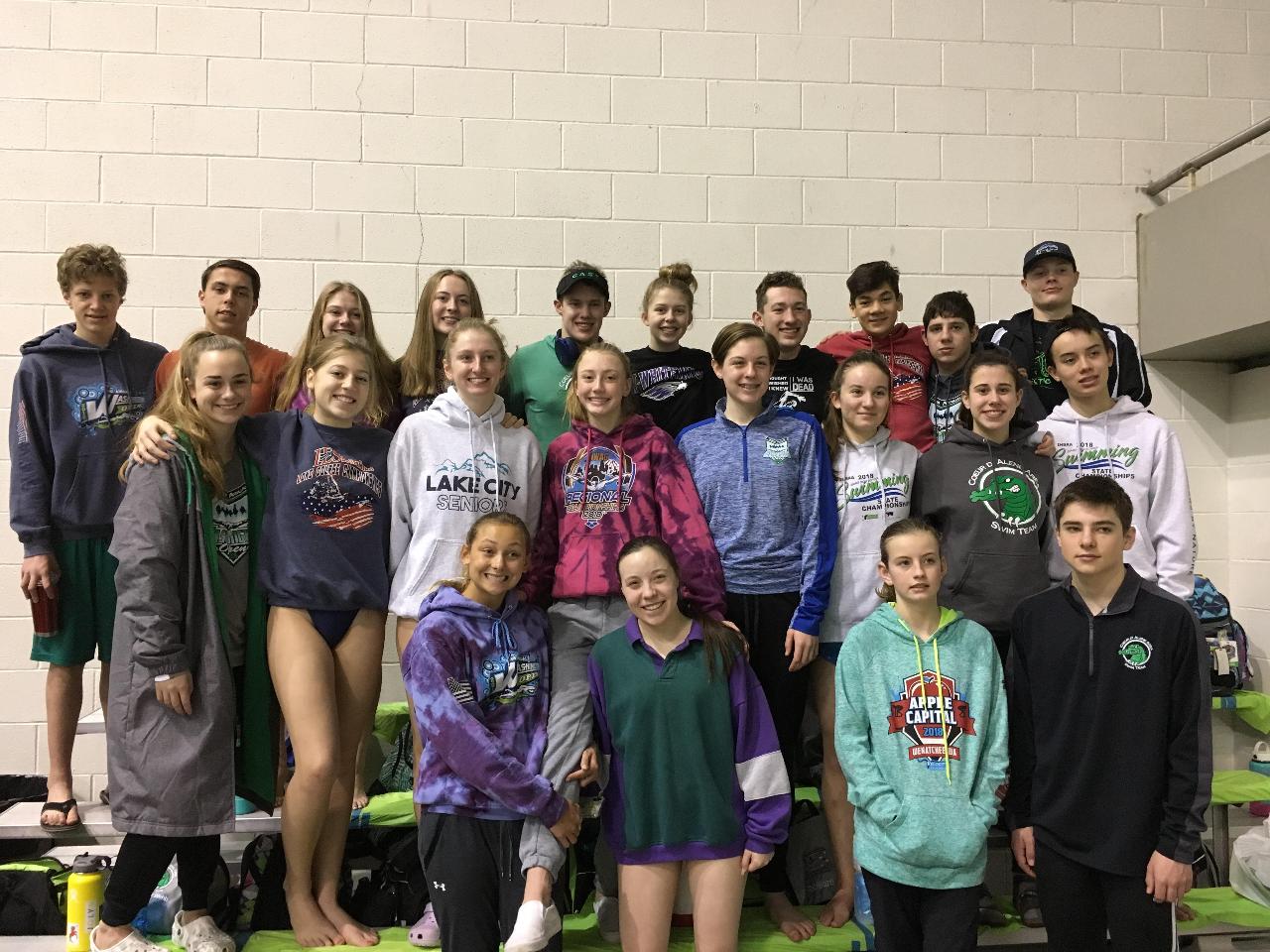 Congratulations to the 24 swimmers who attended the Washington Open last weekend! This is traditionally a fantastically fast meet, both in terms of the overall level of competition and how our swimmers perform. This year was no different; 1300 swimmers from Alaska to Colorado were in attendance, and it took at least a Senior Sectional cut to make it back for a second swim. CAST entered the meet with no swimmers ranked in the top 24, but wound up with 3 finals over the course of the weekend and a 60% best time rate.

Leading off the headlines was Gabby Garasky, competing at her first open style meet-so, at just 12 years old, she was swimming against 18 year olds heading off to college! Gabby was a perfect 9 for 9 on best times, and broke 8 team records-the 100 free, 200 free, 500 free, 100 fly, 200 fly, 200 back, 100 back, and the 50 back (while leading off a relay). This was a spectacular triumph on her biggest stage yet, and Gabby is closing in on several IES records for her age group! Logan Robillard was one of our two swimmers to make a finals swim; Logan led off the meet with a blistering 1000 free, placing 20th, and is now 6th on the all time performance list; Logan also made finals in the 500 freestyle, and made his Senior Sectional cut to the HUNDREDTH of a second; these two swims jump started a weekend that was 9 for 9 on best times, and earned him new spots on the all time performer list in the 200 fly and 500 free as well. Lanis Webb earned his first ever Senior Sectional cut in the 200 backstroke, where he finished 22nd, and grabbed top 10 performer time (he would get another one in the 100 back on Sunday). Lanis was another member of the 100% best time club, with 8 swims that set new personal records, and he has now punched his ticket to Seniors in March!

Lance Mielke, recognized as our male swimmer of Christmas training for his exemplary effort, had predictable results after all his hard work. Lance dropped in all 7 of his events, blasting his previous bests in the 100 and 200 breaststroke by 4 and 12 seconds, respectively. Lance is now the second fastest breaststroker on the team, and has eyes on that #1 spot!     Josie Jennings, another member of the 100% club, had 4 best times; Josie had been gunning for the 100 fly all weekend, and was rewarded with a 6 second drop; she also smashed her previous best in her 100 back, one of her primary events, by an astonishing 3 seconds, and made her first AGS cut! Nikki Cicero was also 4 for 4 on best times, crushing her previous bests in every case. Nikki set out to break 1:00 in the 100 free, and went so fast she skipped right over the 59 second mark to swim a 58.6, a 4 second drop! This was only eclipsed by her 5 second drop in the 100 breast. Dylan Opp swam 4 for 4 best times, and in keeping with the theme, dropped a ton in his breastrokes-2.5 in the 100 and nearly 6 in the 200! This was Dylan’s first time at this caliber of meet and he rose to the high level of competition admirably. Taylen Zahnow, our female Swimmer of Christmas training, rounded out the 100% club with 3 PR’s, including the 50 free by almost a second!

Micah Sharples has had a long road to recovery, with much of last year hampered by injury; but anyone who swims with Micah knows she is always tough as nails and would inevitably bounce back! Micah broke through with 5 best times, and qualified for Senior Zones this summer in 2 events; I don’t know that there was anyone the whole team was rooting for more to have a good meet, and she certainly delivered! Trista Slife was our lone A squad representative, and was also our youngest competitor having just turned 12 last summer. This was her first open style meet, and Trista responded with a 3 second drop in her 200 breast (just barely missing her first AGS cut) and a 3 second drop in her 100 free. Look for her to return in March for AGS! Cameron Craigie was 4 for 6 on best times, highlighted by his 6 second drop in the 200 free to break the 2:00 barrier. Cameron also had a tremendous 200 IM, and showed a lot of growth in his fly stroke. Alli Hood swam 3 best times, and gutted out a great 1650 to close the meet; although it wasn’t her fastest ever in the event, she took it out like a champ and was on pace through 1100 yards for a tremendous swim, but couldn’t quite bring it home. It was probably the most courageous and gutsy swim of the weekend, and still earned her a couple of spots on the top 10 performance lists! Ethan Downing, swimming unshaved and still doing double practices as he is in the midst of his high school swim season, still swam 3 best times; Ethan has been knocking on the door in his 50 freestyle, and his sprints really showed up this weekend as he went under 23.00 for the first time! Ethan also had a great drop in the 100 breast to retain the title of “fastest breaststroke on the team”-at least for now! Kaleigh Goetz swam her 3 events on Friday, earning 2 best times with an incredible 9 second drop in the 200 back and 2.5 off her 200 IM, as the newly minted Junior squadder got her first taste of the world class facility in Federal Way. Ryan Heick finished 2 for 3 on best times, featuring a phenomenal 200 breaststroke where she dropped 9 seconds and just missed the 10th fastest time in team history in that event; Ryan is knocking on the door of her AGS cuts for March as well! Josh Hudlet  went 3 for 4 on best times, highlighted by an aggressive 200 breast that broke through the 2:30 barrier and had the out speed of a truly fast swim! Julia Pierce swam a pair of best times over the weekend; despite missing several weeks of training that hindered her endurance, Julia went hard every race and gave herself every chance to improve, and it paid off in her 200 back (3 second drop!) and 100 fly. Sydney Webb swam 2 best times, showing great focus and improvement in her body position in her 200 free, and posted her fastest non-relay 100 freestyle ever on Sunday.

Natasha Astrauskas was right on her best times all weekend, often within hundredths of a second, and finally broke through with a blistering 1:00 100 back on Sunday with some of the best underwater work on the team. Natasha was our highest placing female swimmer with her 32nd place in the 100 fly, and has set herself up for a very successful championship season this March.  Chris Hartman finished the meet strong, with a gutsy best time in the 100 freestyle; Chris has been retooling his stroke all season, and the first real dividends showed as Chris kept fighting and goal setting all weekend and it paid off in his last swim. Kendra Newman had the misfortune of falling ill right before the meet, and even with the setback raced hard and still managed to swim right at her bests every time. Tori Wilson had the same sick bug, but she gamely raced hard all weekend, particularly in her 100 breast and 100 backstroke. Abbey Whiting rounded out the sick-right-before-the-meet crew, and though she didn’t drop any time, she got stronger as the weekend went on and did a great job keeping her and her teammate’s spirits up and got closer to those PR’s every swim. Kelton Ellis struggled to get any best times over the weekend, but was very close to his best in the distance races-both the 1000 and 1650 were the equivalent of being off by a tenth or two in the 50, and given another month of training will be ready to break through in March at Sectionals!

Great job to everyone-now lets gear up for our Champs meets coming up in the next 2 months!