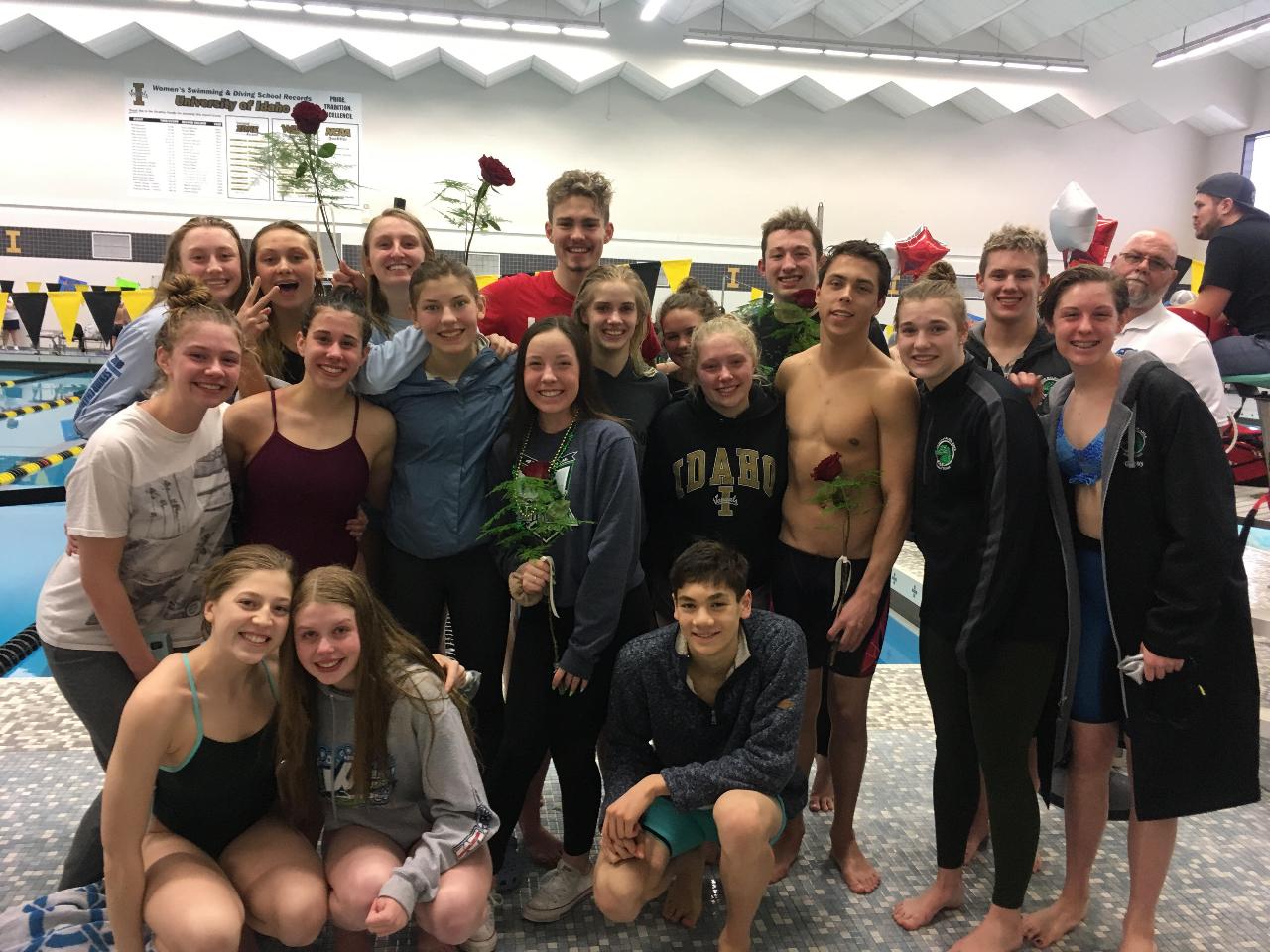 Congratulations to the 48 swimmers who competed at IES Short Course Champs last weekend in Moscow. CAST placed 4th overall at the meet, and more importantly captured a third straight Champs spirit award! Thanks to all the swimmers and PARENTS who raised the roof and loudly cheered our swimmers on all weekend.

Leading off the highlights has to be Gabby Garasky, who had the most remarkable Champs meet of any CAST swimmer in at least the last decade. Gabby broke 3 IES records; the 50 fly (by exactly a full second!), which had stood since 2006; the 400 IM, which had stood since 2003; and the 11-12 girls 50 free, which has incredibly stood for 25 YEARS before she came along and beat it by a half second! Gabby won 6 events, breaking 4 other team records along the way, and came away with the high point award for the 11-12 girls. Her 50 fly currently ranks 9th in the country for 11-12 girls!

Logan Robillard tied for high point honors in the 13-14 boy's category in a back and forth battle all weekend long with Andy Gelston from Tri Cities; Logan won 5 events, broke the meet record in the 500 freestyle, and moved up the team’s top 10 performer lists in the 500 free, 400 IM, 200 fly, and 1650 free where he is now 5th, 9th, 9th, and 4th respectively. Aren Kariotis was our other event winner and top 3 high point placer; Aren won 2 races, now owns the second fastest 50 free in team history, and finished 3rd in the high point race for 15 and over boys. Aren is also now the 8th fastest performer in the 200 backstroke for CAST!

Shout out to a couple of folks who made new cuts for the next level of meets; Trista Slife captured her first ever AGS cut in the 50 breast, and narrowly missed 3 more in the 100 breast, 200 breast, and 100 IM; she finished with 4 best times and was 2nd and 3rd in the short breaststrokes. Micah Sharples garnered a pair of new Senior Zone cuts in the 100 fly and 200 back, and is now on the verge of 4 more AGS cuts as well thanks to her great swims. Natasha Astrauskas dropped over a second to get her second Senior Sectionals cut in the 100 back en route to a second place finish. Abbey Whiting dropped 10 seconds in her mile and placed 3rd to get the AGS cutshe also dropped in her 500 freestyle. Ethan Downing similarly dropped 25 seconds to get an AGS cut in the 1650, placed third, and had bests in the 50 and 100 freestyles. Great job to all those moving up to the next rung of the swimming ladder!

It was senior recognition day on Saturday, and for two of our graduating ladies, it was their final time suiting up for CAST as Toriana Wilson and Louie de Tar said farewell to competitive swimming. Louie was the longest tenured CAST swimmer (she’s been here as long as I have!) and represents the end of an era; it’s hard to imagine CAST without a de Tar on the club! Our outgoing team captain Tori finished out like she has so many times, racing her heart out in the backstroke, and said a teary goodbye to the club she’s given so much of herself to. Thank you both for all your years with CAST! If you didn’t get a chance to say goodbye, don’t worry, as both ladies will be at our team banquet in June.

We had many great performances; some of the highlights include Avery Gephart dropping in 6 of her 7 races, and showing the most racing enthusiasm on the team. Avery stuck around for finals Sunday night as an alternate, and was rewarded with a second chance at her 200 backstroke where she dropped from her best time that morning. This was a perfect example of someone going the extra mile for another chance to swim fast! Lara Cocis tore up her first Champs meet for CAST, going 4 for 5 on best times and placing top 6 in all her events. Erin Griffith was 5 for 6 on best times and made finals in the 50 back, finishing 8th.  Pema Anain had 6 best times including drops of 14 seconds in her 500 free and a whopping 30 seconds in the 500 free, where she placed 6th. Josh Hudlet had an excellent meet, getting a long awaited PR in his 100 breast in finals; he went 4 other best times, including a fantastic 3 second drop in the 200 breaststroke! Alyssa Michalk started off the weekend tremendously with 5 straight best times, breaking 6:00 for the first time in the 500 free. Lance Mielke went 6 for 7 on best times and continues to march towards AGS cuts next year in both breaststrokes. Kaycee Skelton also dropped in 6 of her 7 events, and was twice on the cusp of breaking 1:00 in the 100 freestyle, including a tremendous relay split on the 4x100 free relay. Kaleigh Goetz had 5 PRs, and blasted through the 1:00 barrier in the 100 free by almost 2 seconds.

We are rapidly approaching the end of short course season; good luck to all our swimmers at the Shamrock this weekend and our two sectional meets in Federal Way!