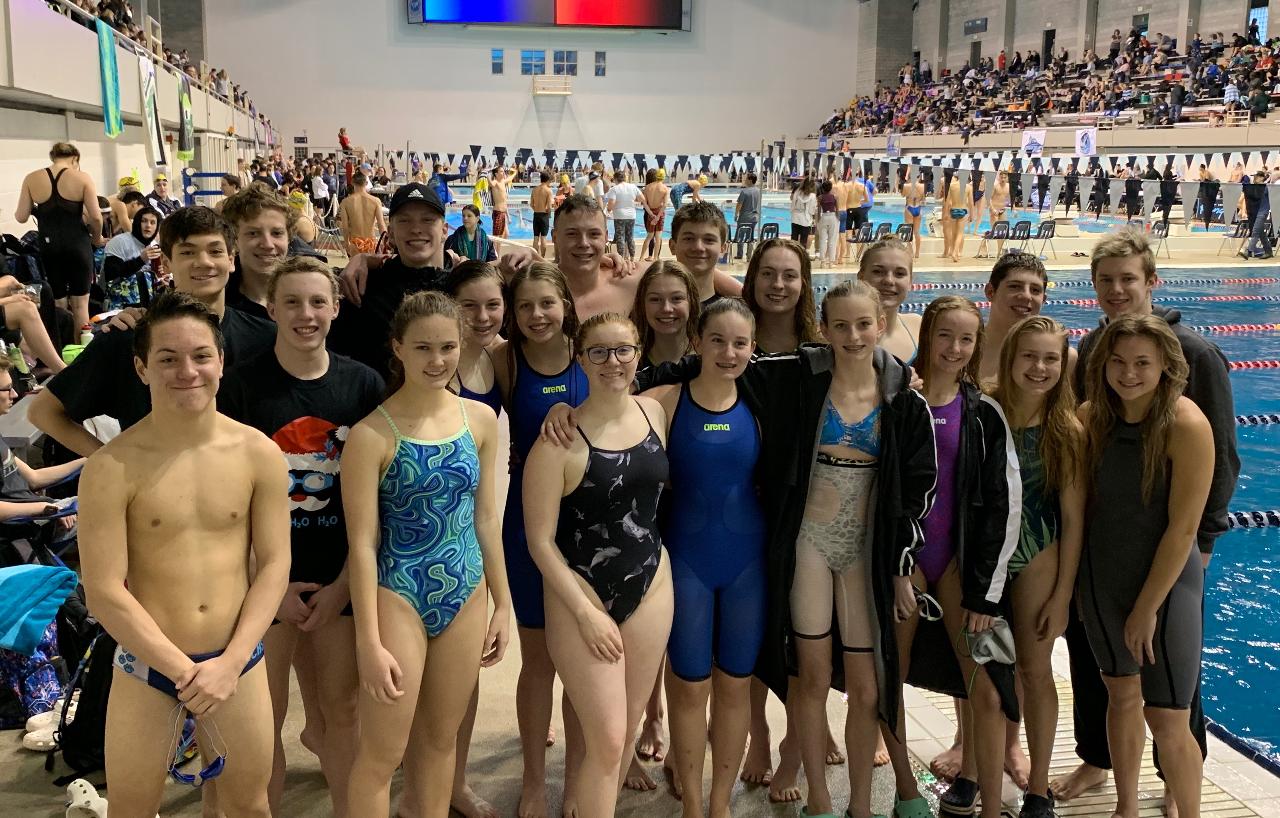 It was once again a very successful Washington Open meet for the 21 Crocs who travelled to Federal Way to compete in one of our most anticipated meets of the year. WA open featured 1300 swimmers, with some events having over 400 entrants (hello, girls 50 freestyle!) As always, the competition was very fast and all our swimmers had plenty of opportunities to race. Each of them made the coaches proud and deserves kudos for their efforts!

Ethan Downing fulfilled a long-held goal, qualifying for Senior Sectionals in the 1000 freestyle on day one, which was a tremendous start to the meet. Ethan has been trying to qualify for that meet for 2 years now, and it was an instantly memorable and joyous moment when he realized he had gotten it and now gets to compete there in March! Ethan dropped 35 seconds in the 1000 in order to qualify, and also had best times in his 50 free, 100 breast, 100 back, and 100 fly, moving up the team’s top performer list in the fly and 1000 freestyle.  Abbey Whiting also qualified for the first time for Senior Sectionals in a distance race, a stunning drop that left even her surprised! Abbey dropped nearly 40 seconds in her mile to net her first cut, making her the second fastest female in CAST history in that event. Abbey had a stupendous meet, dropping time in the 1000 free (also now the second fastest swimmer in that event), 200 back, 50 free, 500 free, 100 back, 100 free, and 100 breast. Jacob Ballard was our top points scorer, qualifying for finals in all 6 of his swims. His best finish was 4th in the 100 breast, just .5 out of first (out of 335 swimmers entered in the event). Jacob amassed 4 best times including an insane 23 second drop in his 500 free, and made the CAST top performance list in the 200 free, 100 breast, and 50 free, while improving his performer standings in the 200 IM and 500 freestyles. Logan Robillard was an ironman, swimming the 1650, 1000, 500 (twice, once in prelims and once in finals), 200, 100 and 50 freestyles, the 200 fly, 100 fly, 200 IM, and 400 IM. Despite racing 4,900 yards over the course of 3.5 days, he dropped time in all but ONE of his events, which is quite frankly a stunning achievement. Logan’s best races were his 1650, where he dropped 28 seconds, broke the coveted 1630 barrier (averaging under 1:00 per 100),  and moved into the 6th fastest performance spot in team history, and his 500 free, where he dropped 5 seconds, qualified for finals, dropped again in finals, and is now the 3rd fastest swimmer in team history. Lanis Webb was one of only 3 CAST swimmers to qualify for finals, making it in the 100 and 200 backstrokes with great best times in his morning swims to move up over a dozen places. He now ranks 6th in team history for swimmers. Lanis also dropped time in his 100 fly, 100 free, and 500 freestyle. He had a great moment on Sunday, when he dropped time in his 100 back, had to do a swim-off after a 200 fly and nearly matched his best time that he had swum that morning. It was a big, gutsy swim! Adam England, owner of the highest practice attendance percentage for the season, made all his commitment pay off with a perfect 7 for 7 on best times. Adam made it on the CAST performer lists in the 1000 free (a 10 second drop) and the 400 IM (a 6 second drop), while also bettering his 200 IM, 200 back, 50 free, 100 breast, and 100 fly times. He is well set up with great goals for Senior Sectionals in a couple of weeks with a great training base. Lance Mielke similarly went 7 event for 7 best times, with drops in the 200 IM, 50 free, 100 fly ,100 back and 100 free. His signature events, the 100 and 200 breaststroke though, were on another level. Lance dropped 2 seconds in his 100 breast (for context, that moved him up 56 places in the event) and smashed his best 200 breast with a 6 second drop, qualifying him for Age Group Sectionals in March and landing him 10th on the CAST performer list. Lance has been re-working his breaststroke timing and it paid off for him last weekend! Trista Slife had an excellent meet with 4 best times and now sits 9th on the top times list in the 200 breast. That race was a thing of beauty, as she took it out FASTER THAN her best 100 time and finished with quality to drop over 2 seconds. She also earned her spot on the “A” girls relay at just 13 years old! Trista’s other best times were the 200 IM and 50 free. Taylor Zahnow swam three bests, in her 200 back, 100 back, and 100 free and was consistently fast with her relay splits as well, bringing a super attitude in her last WA open.

For seven of our swimmers, it was their first trip to the King County Aquatic Center in Federal Way, a world class facility that is a privilege to compete at. It can be a daunting experience walking into the center for the first time, but it’s invaluable for our athletes to see the big, fast world of swimming that’s out there. Camryn Schmidt was our youngest competitor at 12 years old, competing against swimmers as old as 22. Camryn never backed down at her first open style meet; in her final race of the weekend, she dropped over 4 seconds in the 200 free, which is her second qualifying time for Age Group Sectionals in March! She also dropped in her 50 free and 200 IM. Mason Groth dropped time in 5 of his six swims, highlighted by his 200 IM, his first race at the pool. Mason got himself to the front of the heat and just held on to start the weekend off right. Demi Blaylock, another one of our first timers at the King County Aquatic Center, dropped time in both her 100 back and 100 freestyles. She had a killer relay split, going 36 in her 50 breast and filling in admirably when we had to change around relay assignments. Zack Castaneda, fresh off a successful high school campaign and competing in his first meet with CAST, had a trio of best times in the 200 back, 100 back, and 100 free. Isabelle Downing  was only able to compete on one day as she prepared for a volleyball competition the rest of the weekend, but began the meet with a tremendous 6 second drop in the 200 IM and followed it up by taking off 2 seconds in the 200 back. Racing side by side with her, Alyssa Michalk duked it out with her teammate and ended up dropping 4 seconds in the 200 IM and over 3 seconds in her 200 backstroke. Alyssa also made the trek for three swims on Friday and made the most of it! Avery Gephart had 3 swims over the course of the meet, dropping time in her 200 back to break the 2:20 mark. Avery also took the time to do some college scouting, visiting with a couple of schools and coaches as she prepares to make her deacon on where to swim next year.  Great job to all our first timers!

Several swimmers were dealing with illness or absence during the weekend or leading up to it, but everyone gave it their all and managed to come away with some good swims. Micah Sharples came away from the meet with a nasty cold that affected her swims all weekend, but she still dropped time in the 200 IM (now 9th on the performer list) and managed a top 10 performance time in the 1000 free on day one. Nikki Cicero could barely breathe to start the meet, but she stuck with it and by the end had lopped 3 seconds off her 200 free and dropped in her 100 as well. Kaleigh Goetz had great starting speed all meet, and struggled in her first 3 races to finish as fast as she would have liked. She kept at it though, and dropped time in her 100 free on the last day by continuing to be bold and sprint from start to finish. Josh Hudlet got a best time in his 50 free, although his best race might have been his extremely well split and smartly swum 200 breaststroke that was just off his best. Gabby Garasky came off of a rotten month, with injury and illness taking a toll on her training. She nevertheless swam hard all weekend, even at the end while making it through her 200 fly. While not the meet they were hoping for, all 5 swimmers stayed upbeat and raced hard every time and kept at it, a valuable lesson for everyone as they go through the inevitable “off meet.”

WA Open is a great kickoff to our championship season, and we are excited to see what other great performances are in store over the next two months!