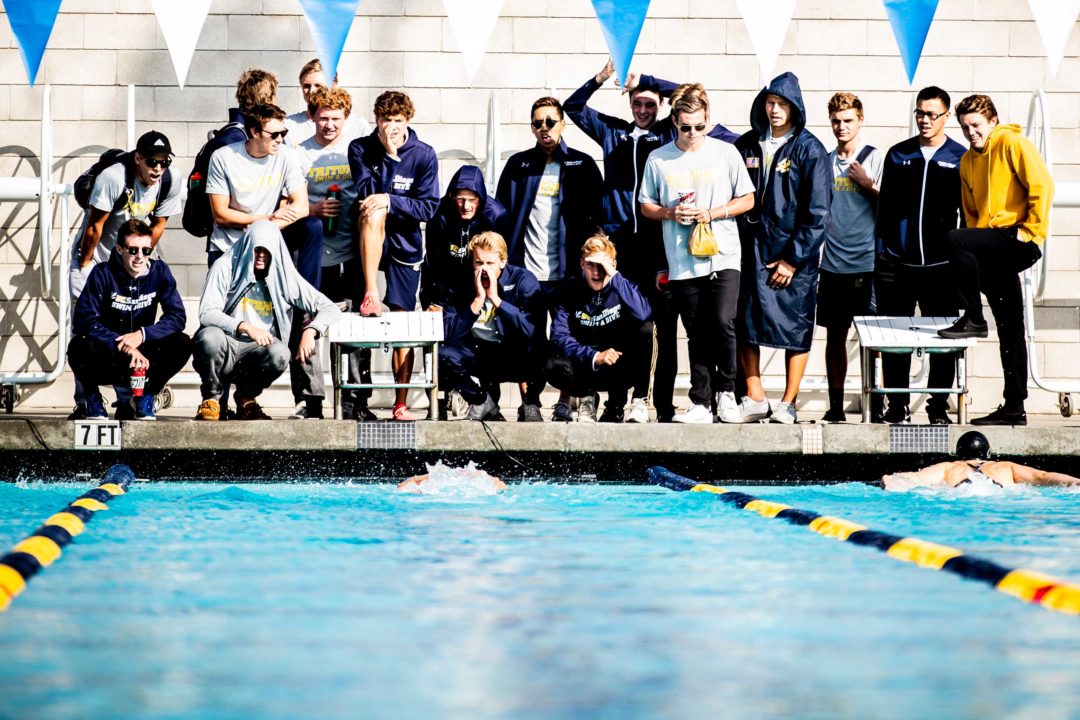 When Swimming brought us together

The first weekend in March of 2020 saw the last weekend of swim meets across the country. At the time, none of us knew that the first weekend in March the swimming world, and the world as we knew it, would come to a screeching halt. The Woodmoor Waves Swim Team was lucky enough to be able to take part in racing on that last weekend of swimming. Attending the Juanita Allington Memorial Senior Champs in Clovis, California, a small group of swimmers from Colorado Springs were able to take part in a truly special race.

Looking to attend a sea-level short course championship meet, a select senior group from the Woodmoor Waves had made the 1,200-mile trek to Clovis, California. The meet started as most meets do, some really good swims, some so-so swims, and one or two “off” swims. On Day 3 of the meet, Aidan Keating raced the 400 IM in prelims and qualified for “C” finals. Upon arriving at the pool for finals, Aidan found himself as the sole swimmer in the “C” finals. Not really looking forward to swimming by himself, Aidan asked if he could scratch the race since he had already gone a best time in prelims. “No” was the answer, followed by “put on your big boy pants and go after it.” By the time Aidan swam, it was dark out and most people had left the pool as it was approaching and 7 pm. A & B heats swam with some impressive swims. Now it was time for Aidan to step up.

I suppose this would be a good time to explain that Clovis Swim Club and Orinda Aquatics were locked in a heated battle for first place in the meet. Both teams were looking for the “W” but for just under 5 minutes on that Saturday evening, the entire pool was on the same team. Most of us have had the privilege of swimming the 400 IM. Few of us have had the honor of swimming it alone. Everyone that evening knew what Aidan was up against.

The whistle gave its familiar quick four chirps followed by a long blast. Aidan stepped up. Aidan’s swam started like many of our swims that weekend – six simmers and two coaches cheering. Then another voice was heard, then two, and then a dull roar began. “Take Your Mark” followed by the horn. When Aidan dove in, you would have thought the Waves were participating in a home dual meet with the top swimmer on the team diving into the water, not a small team from Colorado competing 1,200 miles from home with a swimmer racing in the “C” finals by himself. By the time Aidan hit the wall at the 25, there were twenty people standing behind Aidan’s lane. Swimmers, coaches, and parents from Woodmoor Waves, Clovis Swim Club, Orinda Aquatics, and Las Vegas Swim Club, just to name a few were all behind Aidan’s lane cheering together as one swim family. Folks who had no idea what the name was of the swimmer in the water were cheering for Aidan. By the time he hit the wall at the 50, another 20 swimmers had gathered behind the blocks to cheer him on. Now it should be noted that all of the Waves swimmers were at the 25 end of the pool, so everyone cheering for Aidan behind the blocks were total strangers to Aidan. When Aidan hit the wall for his 100 fly split, his split was a lifetime best time in the 100 fly 58.2 — his first time going under a minute. The race continued. The cheering continued. For four minutes and 36 seconds, the swimming world in Clovis, CA united behind Aidan and his journey in the 400 IM. After dropping ten seconds in the morning prelims, Aidan raced home, dropping an additional four seconds from his morning best.

Swimming is an individual sport, but every once in a while you get to witness something special that pulls large groups of people together for a common cause. The camaraderie at the Clovis North Pool that night was something I will always remember. As an advocate for swimming, this race and everything that went into it, both in and out of the water, is why I think swimming is the greatest sport on the planet.