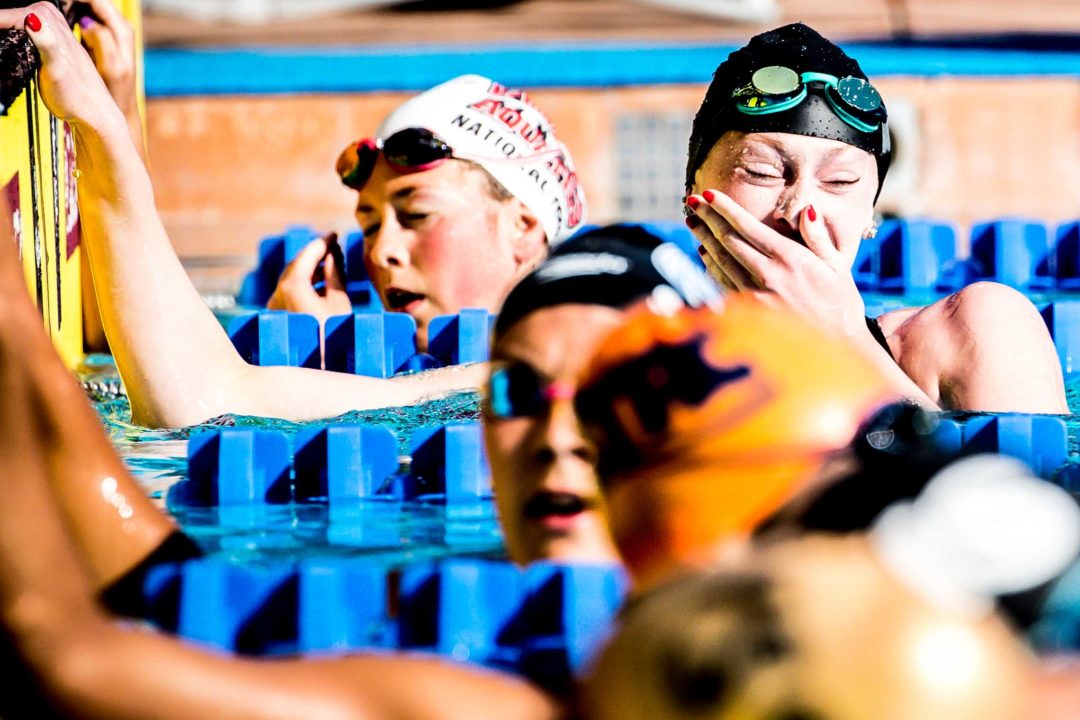 Worrying about our worries is something we all do.

We worry about disappointing our parents, our coaches, teammates, ourselves, our fans on social media. We worry so much, in fact, that we worry about how worried we are.

But how accurate do you think those worries are?

Turns out, not very.

The big meet is coming up, and with time on our hands thanks to the reduced training schedule that comes with tapering, there is ample opportunity to think about all the things that can go wrong.

Tumbling down an unending staircase of what ifs, the worry and performance anxiety builds to the point that our confidence is left in tatters and we end up swimming like garbage on race day.  The acceleration and spread of our worries can feel overwhelming.  Some of them end up being self-fulfilling—if you are perpetually stressing about not getting yourself DQ’d, the likelihood of getting DQ’d goes up. It’s the joymisery of trying to stop or suppress a thought, and then that thought becoming even more dominant.

Other times we use negative what ifs to manage expectations so that we don’t get disappointed. By setting the bar intentionally low we protect our ego from the possibility of experiencing failure—because we expect little, when we perform poorly, we are merely swimming down to the low standards we built for ourselves.  Which, as you can probably relate, is unhelpful when it comes to trying to get the best of yourself on race day.

HOW OFTEN IS OUR WORRYING LEGIT?

At the end of the day, they reviewed their entries, noting whether the worries they had listed had come to pass.  Some of the takeaways from the results:

WORRYING TAKES UP A LOT OF EMOTIONAL AND MENTAL BANDWIDTH.

The emotional and mental cost of worrying was substantial. The participants spent over a quarter of their day thinking about the worries in their lives.  Yikes.

On top of the time spent, they were acutely worried much of the time, with their worrying hitting an average intensity of 4.5/7. This kind of perpetual worrying is exhausting and draining.

This is the biggie. We worry, we worry a lot, and we worry abut things we don’t really need to worry about.  Most of the time, anyway.  Over 91% of the time, the worries listed in the journals never came to fruition. Just 9% of the stuff that people were worried about happened.  These numbers are pretty encouraging, but there was also a considerable number of participants—a quarter of them—whose worries didn’t come to pass at all.

EVEN WHEN TRYING TO BE RATIONAL, THEY WERE STILL WRONG.

With each worry that was journaled, the participants were asked to guesstimate the odds of it coming true by using both their feelings and a logical, rational outlook.  While the gut reaction was wrong more often (62% to 9%), even the more rational assessment was still way off, being more than 3x higher than reality (41% to 9%). Oof.

Easy advice, right?  And I’m sure that we’ve all received it from a coach, parent or teammate when experiencing anxiety and distress. I can confirm that whenever someone said this to me before a big race, it only made me more stressed and angrier.

My problem was that I never knew how to deal with the worries in a functional way. I relied on will-power and aggressive self-talk. That if I just told myself enough times not to worry, to not worry so much, and to stop being a worrier, that my worries would scatter under the bleachers.  But going head to head with my worries only made it worse.  As I continued to try and out-muscle my worries, frustration compounded as I felt control of my mindset and emotional state slipping away from me.

The end result was that all of my mental focus and emotional bandwidth ended up focused on this problem. Nailing my pre-race routine, focusing on a race strategy, doing things to stay relaxed—they were all being ignored because my brain was spinning its wheels trying to un-worry itself.  About twenty years too late for me, there is some good news for you swimmers out there who grapple with an acute case of the worries when you need or want it least.  Here are some proven ways to take your natural urge to worry and de-claw that stubborn little kitty.

JOURNALING YOUR ANXIETIES AND PRE-RACE NERVES.

For the athlete who struggles with competition anxiety, journaling out your anxieties and fears can help in a pinch.

Literally grab paper and a pen and using words and sentences barf out the things you are worried about happening in competition. Research with students found that this was a proven way to help boost scores on high-pressure tests.

Our fears and anxieties thrive in the dark and murky deep end of our brain. They lose a lot of their punch when we drag them out into the light and splash them across the page.  Forming those anxieties into words on paper are a great way to remove their slippery grip on your performance.

Although a small sample size (29 people), the study found that the type of daily journaling used helped to decrease worrying over time.

Outline your daily fears and reflect on them—you will get better at seeing which are overblown and which are worth listening to.  When we allow our worries to run loose, they gain a foothold. The longer we have them, the more authentic and legit they become.  By writing them out, seeing which ones are baloney, and assessing the likelihood of them coming to pass, you learn to sit back and detach yourself from the overblown worries.

Performance anxiety is a tricky thing to figure out for a lot of swimmers. Almost daily I get emails from swimmers and parents who are frustrated with training like a tiger and then racing like a kitten.

Reframing stress as a challenge instead of a threat is a helpful way to shift a swimmer’s mindset into a more high-performance stance.  We all experience nerves and the physical symptoms that come along with swimming under pressure—it’s how you mentally frame it that will decide whether those nerves help or hinder you.

REPLACING WORRIES WITH SOMETHING ELSE.

One of the sneaky ways to calm your worries isn’t to suppress them—it’s to find something else to focus on.  Our brain is a remarkable little computer and it can only really run one app (or thought) at a time. Instead of trying to suppress those worries (which will not work), run a different app:

What if I do accomplish my goal—how neat-o would that be? What if I focus on getting myself in the best position possible to be successful—how much more likely am I to swim fast if I do that?

Alt+Tab’ing a change of focus in this way won’t make the worry app crash, but it will minimize it into the background, which is good enough when it comes to swimming your best.