Do We Really Want our Children Drinking Energy Drinks? 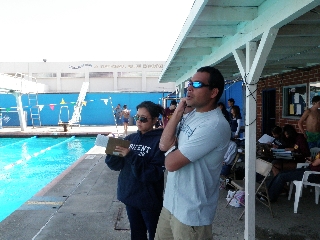 Do We Really Want our Children Drinking Energy Drinks?

I see parents walking into the swim meet with six packs of it.  I see the spent cans and empty colorful little plastic bottles under the bleachers where the swimmers are sitting and wonder, “Why?”

What’s the point of all the swim and mental training we do?  Isn’t the point of it all to establish the life skill of understanding the relationship between fitness, work, setting of goals, and achievement?  Where do the perceived shortcuts offered by energy drinks enter into the equation?  What part of the training do they represent?  Certainly these shortcuts do not fall under the category of good nutrition.

Shortcuts are NOWHERE in my equation.  Goals + work + fitness + proper nutrition ==> achievement.  I hate the commercials that imply otherwise.

Unfortunately, the mentality of many is, “why not?” and, “Hey, everyone else is doing it.”

Well, aside from the philosophical issues involved there are also potential health issues.  This alone should scare every coach and every parent into saying “NO!”  “No energy drinks, period.”  Run AWAY from them!

The respected journal Pediatrics published a “literature review” this past week and I have reprinted three related articles below which should, at the very least, raise a doubt in your mind about the potential health risks of energy drinks.

(And just so we are clear, even if these energy drinks were perfectly safe for the body, I would still be against their use as they are intended to defeat one of the most important aspects of life --  we WORK.  We work to achieve.  Shortcuts cheat us of our self-discipline, self-reliance and our-self esteem.)

Energy drinks – many of which contain herbal supplements and up to five times the caffeine of a cola – might be quite harmful to children, according to a literature review published in the journal Pediatrics on Monday.  Among the findings:

-         Caffeine in the drinks can exacerbate cardiac conditions especially in children with eating disorders) and interfere with calcium absorption and bone mineralization in young adolescents.

-         Extra calories in the drinks can contribute to diabetes, high body mass index and dental problems.

-         The drinks are unregulated in the U.S., and the number of overdoses of caffeine from drinking them are not known.  But in Germany, Ireland and New Zealand, officials have reported cases of liver damage, kidney failure, seizures, confusion and arrhythmias associated with energy drink use.

The authors concluded that energy drinks don’t have a therapeutic benefit to kids, and they urged pediatricians to ask patients about their energy drink consumption and let them know about potential dangers.

Energy Drinks May Be Risky For Some With Health Problems, Study Says

Energy drinks packed with caffeine and sugar may pose serious health risks to users, especially children, adolescents and young adults, according to a study by the University of Miami School of Medicine reported Monday in the online version of Pediatrics, the peer-reviewed journal of the American Academy of Pediatrics.

The study, co-written by Dr. Steven Lipshultz, chief of pediatrics at the UM medical school, says the drinks "have no therapeutic benefit, and many ingredients are understudied and not regulated."

An 8-ounce can of Rockstar energy drink has twice the caffeine of a 14-ounce bottle of Coca-Cola, the study notes.

The energy drink industry disputes the study's findings: "This literature review does nothing more than perpetuate misinformation about energy drinks, their ingredients and the regulatory process," said Dr. Maureen Storey, senior vice president of science policy for the American Beverage Association, in an e-mailed response.

According to Lipshultz, the drinks pose special risks for children with diabetes, ADHD, undiagnosed heart problems and other problems.

Packed with harmful levels of caffeine, energy drinks offer no therapeutic benefit and may put some children and young adults at risk of health problems, according to a study published today in the journalPediatrics.

Energy drink overdose -- causing a small body to ingest too much caffeine and ingredients such as taurine and guarana -- could lead to stroke, seizure and even sudden death, particularly in youth with health problems such as diabetes, cardiac abnormalities or behavior disorders, the study found.

Because the drinks are marketed as nutritional supplements, they aren't subject to the same caffeine limits on soft drinks or the safety testing of medicines, the authors write. And many drinks include ingredients that aren't regulated or haven't been sufficiently studied, they said.

Researchers at the University of Miami came to their conclusions after a review of published articles -- from medical journals, newspapers and trade publications.

Young people make up about half of the huge energy drink market and somewhere between 30 percent to 50 percent of adolescents report consuming energy drinks, according to background information in the study. Since energy drinks are often marketed to young people, doctors should screen their young patients for their use and work to educate parents and children of the potential harms, the authors write.

Folks at the American Beverage Association told the AP that the report is simply spreading misinformation.

Nevertheless, researchers have expressed concerns about the high levels of caffeine in such drinks before. I wrote a few years back about a Johns Hopkins study in which the author said the drinks should come with labels warning of the possible health risks.

The new study comes on the heels of some local governments banning caffeine-infused alcohol drinks, after federal warnings that they pose health risks. While this study doesn't specifically take on this class of drinks, it mentions that coupling energy drinks with alcohol could only intensify the risks.