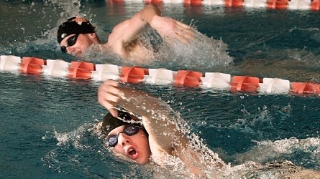 Throne goes to the winner

DeKALB – Josh Page has been sick for the past couple of days, but that hasn’t slowed down his competitive banter with his older brother Cory.

The two DeKalb-Sycamore co-op boys swimming team members will compete for a title today at the St. Charles North Sectional, and they also are scheduled to face off in the 50-yard freestyle.

“I told [Cory] if I beat him, I would take his throne in the TV room,” said Josh, a sophomore. “He has this nice leather chair.”

Cory, the older brother and a senior, isn’t about to let that go, though.

“To me, I don’t really look at who I’m racing against,” Cory said. “But, he’s gotten faster and closer to me. I hope I can take it to him. He’s been talking smack at home, so we’ll see.”

As competitive as the two are with each other, that ability to push one another helped turn the Barbs’ fortunes at the Independent Conference meet two weeks ago, when they went 1-2 in the 100 freestyle and helped propel the team to a conference title against Oswego. Cory out-touched Josh by four-tenths of a second at the finish for the victory.

After losing the conference title by four points last season, the Page brothers have played a big role in the depth that has allowed the Barbs to win conference this year and complete an undefeated dual meet season.

“That was a huge win because he out-touched Oswego’s fastest sprinter,” Cory said. “He was seeded second to me. He went from fifth place to second.

“From that point on, every swim kind of fell in place.”

DeKalb coach Leah Eames said the two Pages have seen dramatic improvements this season, dropping times and getting significantly faster in their sprints.

“When they’re in there together, we kind of expect the Page brothers to go in there and get the 1-2, not just at dual meets or triangulars, but conference, they were 1-2 in the 100 free and that turned around the momentum in our favor,” Eames said.

In one of the toughest sectionals in the state, the two will need to turn in another strong performance to make it to next weekend’s state meet at New Trier.

“Our sectional is always loaded,” Eames said. “With both St. Charles teams, a couple kids from Lake Park and South Elgin, they’ll be placing at state. It will be extremely competitive.”

Just as it will be extremely competitive between the two Page brothers, winner gets the throne.

“As far as when meets go, I think Cory has just a little bit of an extra fire because he’s just determined when he’s head-to-head with his brother that he can’t let his brother beat him ... ,” Eames said. “It’s a good competition for the both of them.”