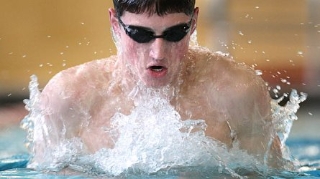 Ready for an encore

DeKALB – When Sam Seneczko touched the wall in Saturday’s St. Charles North Sectional at the end of his leg of the 200-yard freestyle relay, he looked up at the board and couldn’t believe what he saw.

But it was true, and the DeKalb-Sycamore relay team had broken last year’s school record in the event with a time of 1:27.38 and did the same in the 200 medley relay (1:37.85) at sectionals.

Seneczko, a senior at DeKalb, is the only changeover from last year’s team, taking Chad Thompson’s spot to swim with Michael Gordon, Kei Ishimaru and Cory Page. The four make up the two relays that DeKalb-
Sycamore qualified for the IHSA swimming state meet, which starts today at New Trier and continues with Saturday’s finals.

Seneczko, who missed all of last season with a dislocated knee, said qualifying for state was one of his biggest goals entering the season because it’s his final competitive season as a swimmer.

“I struggle sometimes in my individuals, but it was the same way when I went down to nationals with my club team over the summer,” Seneczko said. “When I get on a relay, the main thing is not letting my teammates down.”

He accomplished another goal by getting his name – along with that of his relay mates – on the school’s record board that stands above the pool at DeKalb High in multiple events.

“The medley relay was a huge one,” Page said. “We thought that was untouchable.”

Seneczko’s best relay split in the 200 freestyle before Saturday was 22.95 seconds, marking a huge drop at the perfect moment.

“We kind of knew Sam would be the replacement for Chad Thompson,” DeKalb coach Leah Eames said. “We knew he’d have to be the one to step it up and take over for him. Sam’s dropped a ton of time since last year. He’s improved dramatically.”

Seneczko doesn’t feel like he’s done yet, and has embraced his role on the relay team as it hopes to qualify for finals.

“For me, I think the difference is more of a mental thing,” Seneczko said. “There are a lot of people that like individuals and like to seek that out. But I like relays because of the whole team feel to it. “

“I’m hoping for finals in one of my events, definitely,” Ishimaru said.