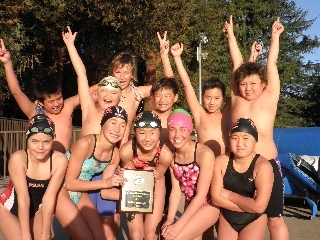 About 150 swimmers, coaches, parents and siblings took advantage of the President's Day weekend to travel to two swim meets in Arizona.  Rinconada's 13-14s and the SCRA site went to the Phoenix Open and Rinconada's 9-12 year olds along with Foothills and Greenmeadow sites traveled to the Lost Dutchman in Chandler, Arizona.  The second group made up of mostly 12 and unders and about 10 thirteen and ups came out swinging on the first night to jump out to a lead that they never gave up.  The lead was too big for the other teams to overcome, even though a number of PASA finalists left early on Monday and didn't swim finals!

Charlotte Cheng had two best times and made finals in all 9 events.

Zoe Lusk had 3 best times, made 8 of 8 finals and was second in the high point trophy for 9-10 girls.

Fernanda Vejar-Richter had a best time in 50 breast, a double dip in 100 breast, was 7 for 7 making finals and was tied for second in the high point with Zoe, until she left for home.

Peyton Wang had two best times and a double dip in 100 back, she made all 9 finals.

Emily Zhang had 3 best times and made 6 of 9 finals.

Marcus Hong had 5 best times, double dip in 100 fly with anew A time and made three finals.

In addition, we had siblings, Parker Wang, Maddie Johnson and Isabella Vejar-Richter swimming in the meet.  Isa and Maddie also helped out on relays.

Swimmers of the Meet.

Sorry girls, but the boys got it this meet.  AJ Johnson had a breakthrough meet.  Marcus Hong also stepped up and swam well, and finally Max Ferenczy was great on relays and made some great changes throughout the meet to impress me every night.

Thanks so much to all the parents who helped throughout the meet.  We had an emergency crew sprinting over to help out as our tents went flying in the gusty winds.  And Juliana and Rhianon once again organized all the food for the team dinners.  We had lots of fun at lunches (those were some huge baked potatoes) and I think I had ice cream/frozen yogurt almost every day.  Please check out the photos on the Rinconada site under community.