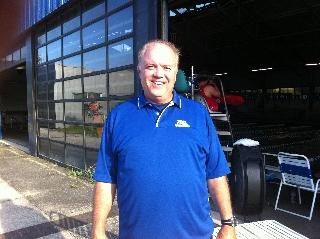 We have a new member to our NFS swim family.  We are very excited to Welcome Coach Mel Nash who agreed today to be our new head coach and successor to Coach Dave who we all regard so dearly.

We are working out the details as to his exact start time and I am sure there may be a little restructuring as with any coaching change.  Coach Mel has Coach Dave's endorsement and is working with him to assure a very smooth transition.

In the mean time here is a little information about our new coach:

Coach Mel's innovative and individualized coaching has produced champion swimmers at every level of the sport. His experience at the international level as both swimmer and coach brings the highest level of professional coaching to NFS.

As an athlete Mel was a World Ranked swimmer for seven consecutive years beginning at age 15. He won Gold Medals at the World Championships, USA Senior Nationals, Pan American Games, and NCAA Division I Championships. Mel was a fifteen-time NCAA All-American at Indiana University under legendary Coach "Doc" Counsilman and an eight-time Big Ten Conference Champion. In Mel’s senior year of high school, he was named National High School Swimmer of the Year by Swimming World Magazine. As a USA National Team member, Mel traveled the world representing the United States in International competitions in Germany , Russia  , Monaco , Yugoslavia  , Brazil and Columbia  .


As a coach, Mel Nash has produced Olympians, USA National Champions, Pan-American and Goodwill Games Gold Medalists, Junior National Champions, 80+ All Americans and a Top Ten NCAA Division I Collegiate team at Texas A&M University  where he was Head Coach for 25 years. Mel’s athletes have competed in six of the last seven Olympic Games beginning with his first Olympic swimmer in 1984.


Mel’s club swimming experience is extensive. He founded and directed Aggie Swim Club in Texas. In the small university town of College Station , where football is king, Mel produced swimmers, taking them from the novice ranks and turning them into champions who scored at USA Nationals and Junior Nationals and qualified for the USA Olympic Trials. In 2006 in Orlando , Mel and his wife, assistant coach Carol Nash, started Swim Orlando YMCA (now YCF Swimming) beginning with 26 swimmers and building it to over 200. Many of those young swimmers are now on college swim teams or scoring points for their high school teams.


By bringing swimmers through a well-planned, long-term development program he plans to carry them from their beginning in the sport to the highest level which they can achieve. Additionally, through Private Instruction and the small swim camps that he and Carol plan to run at the Aquatic Center,  they will reach a wide range of young people, contributing to their success in and enjoyment of the sport of swimming.