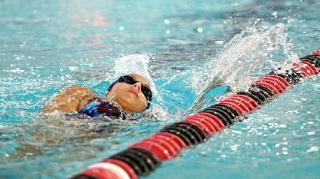 Listed below is an article from the DeKalb Chronicle about DCST's National Team.

It is never easy competing in unfamiliar territory.

Swimmers on the Kishwaukee YMCA/DeKalb County swim team take it as a challenge.

The 2011 YMCA National Long Course Swimming Championship, which is a five-day event that starts today and ends on July 29, has usually been held at the University of Maryland-College Park.

Because of a 10-lane pool, compared to Maryland’s eight, and having the bragging rights of hosting the 1996 summer Olympics, the YMCA national competition will now call the Georgia Tech University swimming pool in Atlanta home.

Kishwaukee swimmer Emily Launer, and senior at Rosary High School, admits she is nervous of the change.

“I’m going to be nervous no matter what pool I swim in,” Launer said. “The location is at a new pool I have never competed at.”

When the team traveled to Maryland, according to Launer, it was like being at a home away from home, as they had familiar restaurants and activities in the area. Now the team looks forward to bringing on new traditions.

“I am excited to try something different and make new traditions with our team,” Launer said.

Though the sightseeing is fun, it will have to come second to the main reason the team is there: to swim.

Launer knows this and is ready to compete in her races.

She will be competing in the 400-meter and 800 freestyle, 400 individual medley and 200 backstroke. She has high expectations for all races and knows that the support from her teammates will help push her toward achieving her goals.

“My goal for this season is just to try and get out there and swim some best times,” she said. “The atmosphere of YMCA Nationals is so great, and with a team as close and supportive as ours, when it comes down to your big race everyone is pumped and excited to swim.

“My teammates and coaches will all be experiencing this new pool together, so I know with their support it will be a good meet,” Launer added.

Alongside Launer, Grant Alef will be a top competitor at the event. Alef, who is competing in the 50, 100, and 200 backstroke, and the 200 freestyle, will be swimming for the University of Minnesota in the fall. He will have many opportunities to swim in Olympic style pools.

Though, this will be his first.

“I’m really looking forward to the competing,” Alef said. “It’s a fast pool and this will be my first time swimming in an Olympic pool.”

Alef, who has always had a home in Maryland with family members in the area, has no family in Atlanta, so it will be an unfamiliar sight. The only similarity between home and Atlanta, Alef said, is the weather.

“The weather here is about the same as at home. It is so hot.”

With a new location, head coach Brian Bickner still has great expectations for his tea with Alef and Launer leading the pack.

“I think we should place in the top 20 in the country this year,” Bickner said. “Grant and Emily should be All-Americans in all their events and both should be looking to get Olympic trial cuts.”

With a younger team than last year’s, which placed 9th in the country, and the loss of soon-to-be swimmer at Xavier University, Michael Gordon, to back surgery, Bickner knows the few older swimmers will have to lead by example, and the younger ones will have to step up.

“Grant is going to have to be a leader for the younger kids and so is Emily,” Bickner said. “It definitely hurts not having Michael. So, we’re counting on the younger kids.

“Daniel Hein should do well. He’s 13 years old, so he’s got quite a few more years. And Brian Schultz, who will be a sophomore, should do well in the breaststroke. Kei Ishimaru is going to have to step it up considerably. It’ll be a really good week for him if he can finish in the top 10 in all his events.”

Whether the competition is in College Park or Atlanta, swimmers and coaches alike on the team seem to be unscathed by the change of location.

After all, water is just water.

As Alef puts it, “I’m here to swim and as long as there’s water in the pool, I’m good.”