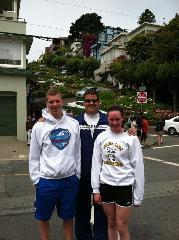 Last night Ellen Williamson took to the water in the consolation finals of the 100 backstroke. Ellen swam to a personal best time of 1:02.58 and finishing 19th overall. This time breaks her previous team record and just fell short of the LSC record 17-18 record by .04. Ellen's time ranks her 135th in the World Rankings and qualifies her for the USA National Junior Team*, for her 2nd straight year and this year joining her brother Max.

2011‐2012 USA SWIMMING NATIONAL JUNIOR TEAM
Team will be announced September 1, 2011
- The top six athletes in Olympic events from the 2011 ConocoPhillips National Championships
- Athletes must be 18U at the start date of the 2011 ConocoPhillips National Championships
- Athletes starting University in Fall 2011 are eligible to make this team
- Times from prelims and finals only will be used Relay lead offs and time trials will not be
considered
- Athletes who competed at the Olympic Games, World Championships [LCM or SCM], Japan Grand
Prix, World University Games, or Pan Pacs for the USA National Team are not eligible.