Coaches
Site Map
Whose Swim Is It? 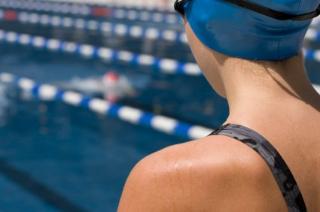 PHOENIX, Arizona, September 27. RYAN Lochte's world record smile and thrust fist in Shanghai upon winning the 200 meter IM (1:54.00) was a long time coming. "The genesis of such swims," says Chris Plumb, head coach at Carmel (Ind.) Swim Club "is the day a swimmer takes true ownership of his swimming."

At age 27, Lochte has taken ownership for quite a while. For younger athletes with concerned parents it is a different story. "Often parents must first learn to let go," says Plumb. "That can be difficult for those who, from a young age, have taken care of a child's every need -- from waking, dressing, feeding, transporting and timing at meets."

Bailey Weathers, previously an executive head coach at Club Wolverine who now is athletics director at Grace College in Indiana, believes that parents want to do more for their kids today than they did 10 or 15 years ago.

"In doing so they often reduce opportunities for swimmers to assume responsibility for their own success. That's something our sport can teach and I'm not sure we have a lot of avenues for that in our culture anymore," he says. "There is no simple answer for coaches on how to teach accountability even when things go wrong, other than to be consistent with expectations and in reminding swimmers of their ownership roles. Part of it is learning that you can put a lot of work into something and not have an immediate payoff; it may take a season or two or even longer."

Ownership evolves over time. "The earlier it is assumed by the swimmer, the better," says Tom Himes, head age group coach at North Baltimore Aquatic Club. "While there is commitment by coaches and parents the greatest commitment is going to come from the swimmer. The most successful swimmers are those that are able to take control of their swimming with the help and guidance from their parents and most of all their coaches.

"Yes," opines Jessica Vipperman, head age group coach for Sun Devil Aquatics in Tempe. "Educating the parent is just as important as developing a good swimmer. In our age group program, we can never spend enough time finding ways to educate and engage our new parents. The parents who value commitment, support their athlete's participation, trust the coaches and enjoy the community created by the team end up with happy athletes involved in swimming for the long term. The converse is also true."

Vipperman offers these Do's and Don'ts for being a great swim parent:

- Don't Remove Challenge from their Path. Often the anxiety a parent feels comes not from an actual challenge or conflict, but the perception of, or anticipation of, a conflict. Experiencing failure is not a bad thing, at any age. It's how we learn to reevaluate our goals and efficacy of a plan, identify where things went wrong and persevere. It's the obstacles we overcame in life that help make us resilient and confident adults.

- Do take success in stride. Early success doesn't guarantee quick success throughout a career. Time drops are made in small or major increments depending on physical maturation. Progress isn't always measured by the clock. Mastering technical skills is just as fundamentally important as learning to race well.

- Do be your kid's biggest fan. Provide him with unconditional support; provide hugs, shoulders to cry on, high fives. Leave the coaching to the coach. Instead of telling him what he did well or could improve on, ask him what his coach said.

- Do address problems when they are molehills, not mountains. There will be hiccups. Keep the lines of communication open with the coach. Life outside of the pool effects life in the pool. Keep your coach abreast of significant life events. If you doubt, mistrust, and have ill feelings towards your child's coach resolve it with the coach, immediately.

- Do ask your swimmer what his/her goals are. When a swimmer first asks about progressing to the next group, my hope is that question is kid driven -- and not coming from the parents. If the swimmer initiates the conversation with his coach about advancing I know he has given it thought and has confidence in his ability to do it.

"Everyone wants to see your child succeed," says Vipperman. "Let the child define what level of success he is aiming for, let him set goals and let him reevaluate those goals when they aren't achieved the first time. Work with your child, and the coach, to provide the necessary and appropriate support."

When parents begin "to let go of control the coach/swimmer relationship can really begin to evolve," says Himes. "Regardless of age, I want my swimmers to learn how to communicate with me on anything involved with their swimming as well as anything that may be affected by or affecting their swimming. Coach-to-swimmer communication is the biggest key to swimming success. During a swimmer's early years, the coach should be educating athletes how to control their swimming destinies. Setting goals (current year, a few years out and more), teaching good practice habits, meet preparation and allowing swimmers to make or be part of various decisions all have an impact towards that end.

"Explaining the importance of practices, as well as making daily practices interesting and different lead to very good practice attendance. The result is that swimmers then understand the level of commitment needed to reach optimal performances and goals. They also gain the confidence and knowledge to take on challenges in both practices and meets so as to make decisions with an understanding of the impact of those decisions," says Himes.

At NBAC, the swimmer-to-coach communication really takes hold around 9-10 as swimmers begin to have input in event selection at meets. At Sun Devil, Vipperman says "at ages 11-13, I want conversations about missing practices or attending meets to come from the swimmer, not the parent." The same at Carmel, "I want to talk to my swimmers about their races and not their parents," says Plumb.

Amazing things can happen when swimmers are given some choice. During Weathers' first year at Southern Illinois University, a senior requested to swim the 200 fly and 200 IM after spending a college career doing 500-1000-1650's with no time improvements. "That year she was much more invested in her swimming, enjoyed what she was doing and had lifetime bests in 10 events.

"Parents often say there is only going to be one gold medal every four years, but in swimming the opportunity to be accountable and learn how to be successful is there for every child," says Weathers.

For Himes the bottom line is "the swimmer should have the ownership of their swimming. It is the parent's job to initially get the swimmer involved, get him to practices and meets and constantly provide a positive/supportive environment (no coaching your kid). It is the coaches' job to educate the parents as to their role, to educate the swimmer about the sport and prepare him technically, mentally and physically so as to allow him to grow and take a bigger role in his/her swimming development. The swimmer's role is to learn what it takes to be a successful competitively and to take ownership with the guidance of the coach and the support of the parents," he says.

"And when athletes feel in control of their own development" says Plumb, "they are more likely to learn what works for them and truly enjoy the journey. The lesson here is 'less is more.' Empower the athlete, trust the coaching staff to do their job and truly support your swimmer by offering advice only when asked."