2011 Short Course Swimmer of the Year 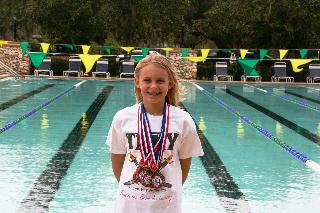 Rockway was awarded Swimmer of the Year for her age group for the 2010 – 2011 Short Course Season. She also was previously named Swimmer of the Year for the 2009 – 2010 Long Course Season. A 6th grader at Nativity Catholic School, Rockway swims for Tampa Bay Aquatics (TBAY) Brandon, at River Hills Country Club in Valrico. The team is led by Head Coach Dave Gesacion, and competes in all USA Swimming age groups for both girls and boys, beginning at “8 & Under” up to the “Senior” Age Group, and is registered with Florida Swimming.

Rockway started swimming competitively at the age of 6. She says, “Although winning is great, the best thing about swimming is the friends I’ve made and the people I’ve met while competing.”

Each year, Florida Swimming House of Delegates presents the Swimmer of the Year Award, to the athletes judged as the most outstanding swimmers of the year.  Florida Swimming (www.floridaswimming.org) is one of 59 Local Swimming Committees that make up USA Swimming. Florida Swimming represents about 14,000 swimmers and 95 clubs located in the State of Florida.