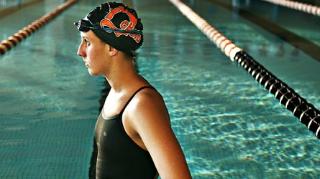 Gidaszewski conquers her weakness in the pool

DeKALB – Tara Gidaszewski will be the first swimmer to admit she’s not a sprinter.

But in Illinois, the Sycamore senior didn’t have much choice in her high school career. Her premier race is the 200-yard backstroke, a mid-distance event that she’s finished in the top 25 nationally at the YMCA Long Course Swimming Championship. That event doesn’t exist in the IHSA state series, only the 100 backstroke.

Yet there was Gidaszewski, the Daily Chronicle Girls Swimmer of the Year, within a breath of qualifying for the state meet in the 100.

“The sprints are something that’s always been difficult for her,” DeKalb-Sycamore coach Leah Eames said. “There were huge markers for her to hit. When she came into this year, from underwater work to a few stroke/technique things, power, just to get the sprint down. At the end of the day, she kept chipping away at that.”

Gidaszewski missed qualifying for state out of the loaded St. Charles East Sectional, finishing the 100 backstroke in 1:02.20, short of the 59.92 state cut time. But the senior – who signed a letter of intent to attend Illinois State next fall – was proud of what she accomplished this season, leading the co-op team to several dual-meet victories and improving her technique to get her in a position to qualify for state.

“I worked hard this whole season,” Gidaszewski said. “I know Leah’s done a good job with helping me sprint because I have a really tough time sprinting and getting to that spring mode. She’s done a really good job with that and I really have no regrets from this season.”

Gidaszewski’s efforts not only this season, but throughout her career, landed her a scholarship offer from Illinois State, where she can race in the 200 at the collegiate level.

“It was a relief,” Gidaszewski said. “The whole recruiting process is really hectic and stressful, so I did all of my official visits and I thought Illinois State was the best for me.”

Eames said Gidazewski is a “very coachable” swimmer and one who should fit in well at Bloomington-Normal, adding that practices next season without Gidazewski setting the pace will be different.

“In the water I’m just really proud of how far she’s come and how much effort she put into it,” Eames said. “I don’t think she can have any regrets. She came in, she did what she was supposed to do every single day, which I think says a lot about who she is and her goals and who she wants to be.”