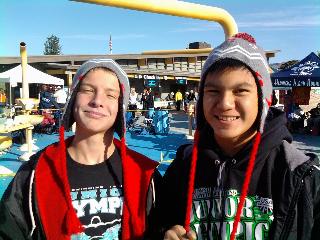 This past weekend was Pacific Swimming's 14 & Under Junior Olympics in Morgan Hill, California.  The meet began on Friday and ended on Sunday.  Carson Sand and Andrew Dysico represented EBAT at this meet and did a fantastic job!

On Friday, Carson began the meet with 3 swims:  200IM where he dropped a few tenths and breaking into the 2:18 barrier.  He then swam the 100 breast where he took off nearly 3 seconds to get his 2nd senior cut and Far Western cut!  He missed finals by 3 places!  He finished off the day with the 500 free where he improved about 1/2 of a second.  Not bad for the 1st day.  On Saturday, Andrew showed up with Carson and they each swam 1 event.  Carson swam the 100 free 1st and dropped almost a full second to a 54.2.  Andrew swam 100 back and also dropped 1/2 of a second!  Sunday was a bit tiring for Carson as he was just off his best times in the 200 free, 200 breast, and 50 free.  A great effort, but the 3rd day ended up being a bit too much for him at this time in the season.  Andrew, however, was still fresh and wasn't finished getting best times.  He swam a best time in the 200 breast improving 1/2 second and in the 50 free he improved 2 tenths of a second.

Both Carson & Andrew did awsome jobs this weekend.  If you get a chance, congratulate them for a job well done!