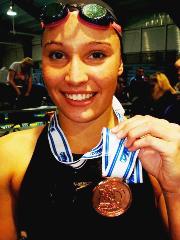 The following appeared in the December 11, 2011 Sunday editon of the St. Petersburg Times:

Why we picked her: Graves already had established herself as a successful distance and mid distance swimmer but decided last summer to change her events again. After finishing ninth at the Class 2A state meet in the 100-yard butterfly and 10th in the 500 freestyle as a sophomore and 11th in the 100 butterfly and 200 freestyle as a junior, Graves switched to freestyle sprinting and achieved her top results to date. She was the only female swimmer in the county to medal in an individual event, a third-place finish in the 50 freestyle (24.22), and finished fourth in the 100 freestyle.

Proudest accomplishment: Finishing third in the 50 free might be the single performance Graves is most proud of. But her favorite memories from her high school swimming career are the weekly meets she competed in with her teammates. (Graves is homeschooled but swam for Spoto all four years.)

Did you know? Graves loves Italian food, eggplant parmesan in particular, which is fitting considering her Italian heritage. Her grandfather's last name was originally Spinetta. But his mother, Giorgie's great-grandmother, changed it to Graves after he finished sixth grade. Graves was her mother-in-law's maiden name. And she made the change to break association with her husband's brother, who had a few questionable business relationships.

What's next? Graves will swim for Gardner-Webb University in Boiling Springs, N.C., next year. Recruited for her versatility, Graves doesn't know yet what strokes and distances she will swim."