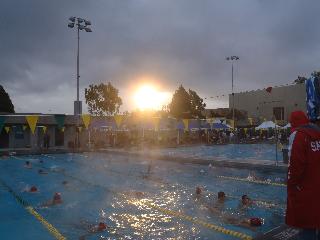 Meiling Chun had a great meet for the women, setting team records in six events and qualifying for Sectionals in three events.  Meiling's highest finish came in the 200 breaststroke where she won GOLD with an outstanding time of 2:25.99.  Lexi Hopps had a Top 10 Finish in the 500 Free.

Other Top 10 Finishes were Theresa Lo (500 free)  and David Wang (100 breaststroke 8th, 200 IM 7th and 5th in the 50 breaststroke).  Top 16 swims were turned in by Michael Wang and Edgar Chin.  The 13-14 Quartet of Alec Hsing, Michael Wang, Raymond Lam and Edgar Chin all contributed major points in their relay efforts!

Athletes did a great job at the meet.  Lets make those changes so we are faster next time! All in all it was a lot of fun and a great weekend.