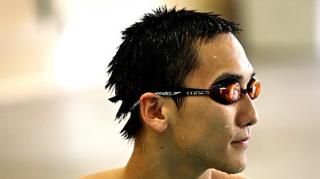 DeKALB – It’s not just about making the state meet anymore for Kei Ishimaru.

“We lost a lot of key members. I’d say I need to step up. Making state isn’t the goal. I have to. It’s a requirement for me,” Ishimaru said. “To go beyond that, [DeKalb-Sycamore co-op swimmer] Michael Gordon made a legacy. He made top six at [state] finals.

“I rode on the coattails of that. But now I need to make my own. It’s time for me to start my own [legacy].”

It’s also not about the Sycamore senior swimmer’s individual goals, either.

“I love having the challenge of supporting them while trying to do my individual goals,” he said. “But, for me, it’s team before individual.”

As a captain of the DeKalb-Sycamore co-op boys swim team, the Illinois-Chicago recruit has embraced the role of a leader wholeheartedly. At the same time he’ll attempt to craft his own legacy in his first year without Gordon, last season’s Daily Chronicle Swimmer of the Year. Ishimaru is the lone individual state qualifier to return this season after making it to the state meet in the 200-yard individual medley and 100 butterfly.

With a co-op team that has its best participation numbers in years – 22 kids came out for the squad this season – it’s a bigger group for Ishimaru to help guide.

“Kei loves to lead,” DeKalb-Sycamore coach Leah Eames said. “I think it helped last year that he was a co-captain with Michael Gordon. I think they kind of fed off each other and led in a different way. Now that he’s a senior, he’s taking over that role. He’s already shown it in practice with the guys to get in and work hard every single set. After practice, he’ll round them up and kind of say a few words.”

The effort has been noticed by Ishimaru’s teammates.

“He’s really stepped up,” Sycamore senior Alex Feczko said. “Building on last year’s success that he had and transforming it into this season, he’s really stepped up nicely and been inspirational and that leader of the team that we’ve always wanted him to be, so I’m proud of him for that.”

Ishimaru has taken a page from Gordon in terms of his practice habits and attitude toward working on his swimming mechanics, something he hopes will not only translate to the type of success Gordon had, but an attitude that helps his teammates, too.

“I try and guide them and help them in the right direction – you’ve got to come in and practice,” Ishimaru said. “If you want to get better, if you want to step up, whether it be JV or varsity, you have to practice.”

Outlook: A young but talented and deep group takes to the pool this season for the DeKalb-Sycamore co-op boys swim team.

Led by senior Kei Ishimaru in the sprints, Marc Dubrick in the distance events and Alex Feczko as an all-around swimmer, the opportunity is there for the Barbs to repeat an undefeated regular season from a year ago. The losses of Gordon, Seneczko and Page were huge, but the competition for spots – especially early in the season – will be fierce.

Look for a pair of freshman in Carlson and Powers to make an immediate impact with Powers in the distance events and Carlson in the sprints.

Eames’ take: “There will be quite a bit of change with these guys with what they swim from meet-to-meet. But I wouldn’t say there’s a set lineup at all yet. We haven’t even had a meet and haven’t had a chance to see what these guys swim. They’re still trying to find their place. They don’t really know for sure right now, but I kind of like that it’s not a solid lineup in the first place. I think with the group of guys, they’re well-rounded enough that we can bounce them around.”