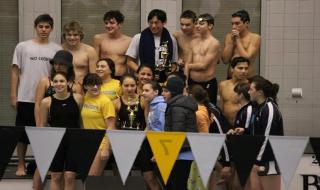 Congratulations to Phoenix Swimmers who came in 2nd place overall at the Bowdoin Open this past weekend.

Phoenix Girls came in First Overall and Phoenix Boys came in 3rd Overall.  On top of that Phoenix also boasted the highest scoring male and female in Brian Poon and Sophie Walker.

All in all it was a great weekend where several Bowdoin Records were broken - including a Phoenix record set the year before.  Record breakers included - Peter Bankes, Josh Turk, Jack Carignan, Conor Moran, and Brian Poon.

Also, a special shout out to Joe Turk who broke 2 minutes in his 200 Free, and 1min in both his 100 back and fly for the first time in the same weekend.  An incredible weekend indeed.

Congrats on an awesome weekend and a great way to mark the midway of the season for Phoenix Swimming!