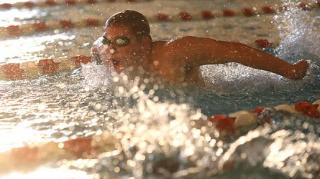 DeKALB – Leah Eames had heard of Dylan Powers before the swimming season began. It was difficult not to.

Powers swims on the DeKalb County Swim Team that Eames helps, though Eames never has coached him. Powers made a name for himself on the middle school level, posting the third-best time in the state in age group last season in the 500-yard freestyle with a 5:03.18.

“When he was in eighth grade, he had a breakout year, he dropped a ton of time at the YMCA state meet,” said Eames, the DeKalb-Sycamore co-op coach. “He got times where I was like, ‘Oh, wow, that’s awesome!’ It really got me excited for me to be able to coach him this year and the immediate impact he’d make on our team.”

Powers is consistently one of the first swimmers to the wall in his distance and butterfly events. He proved it starting in the first meet of the season, when he won the 100 butterfly in a dual meet against West Chicago.

He often wins in come-from-behind fashion, coming back from a half-body length or more to take victory. For someone who said he was “a little scared at first” to race upperclassmen, Powers seemingly is the one who frustrates them by the end of races.

“He’s just got that endurance and that competitor inside of him,” Eames said. “If he can just stay close enough in that first half ... . It’s definitely a part of his strategy. He’s confident he can come back and do that.”

Ask Eames how Powers has done this season, and she’ll use words such as “shocked” and mention that qualifying for the state meet isn’t completely out of the question for the Sycamore freshman if he continues to drop time in the 500 and butterfly events.

For Powers, the answer is a little different.

“I thought I was going to be a little bit better,” Powers said at Tuesday’s practice. “I haven’t been doing as well as I wanted to. But, I’ve improved a lot.”

He’s hovered around the 5-minute mark in the 500 and came across in 57 seconds in the 100 butterfly, about four seconds from the state-qualifying mark. A little more than a month from sectionals at St. Charles North, Eames has put him in the same lane in practice as senior sprinter Kei Ishimaru and junior distance swimmer Marc Dubrick.

“I’d like to make state, but I don’t know if I’m going to,” Powers said. “I haven’t been having the best season, but I’m having a pretty good season. I want to try and place in sectionals and just do the best I can.”

It’s of little surprise that Powers comes off a natural fit in the pool. His sister Mackenzie starred at state power Rosary and now swims at Penn State. Older brother Riley swam for DeKalb-Sycamore, too.

“He’s always been an extremely talented swimmer,” Eames said. “You could tell from the day he started that he had the talent.”

But Powers isn’t the only freshman to make an instant impact for the Barbs. DeKalb’s Michael Carlson has racked up the wins in the pool. At the Boylan Invite where the meet is divided by class, Carlson finished one spot behind Powers in fourth place.

“I wasn’t really expecting too much from me, but I was excited to see what our team could be with a newer freshmen group mixing in with the older kids,” Carlson said.

So far, just as it has with Powers, it appears to be going just fine for Carlson.

“[Carlson] is at that age where he’s finally like, ‘Hey, I’m here to make a difference. I’m here for a reason and I’m going to step up and do it,’ “ Eames said. “For a freshman to be winning events like he’s been doing for us, getting up there and taking people down, we have a good group of freshmen guys.”