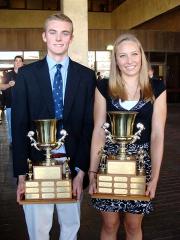 Spoto senior (and TBAY Brandon founding member) Giorgie Graves won the Jessie Helfrich Hicks Award as the top female swimmer in the County. Graves, who has committed to Garner-Webb, finished in the top four in the 50 and 100 freestyle events at the Class 2A state championships in November.